Award-winning artist, writer, and naturalist James Prosek (USA b. 1975) gained a worldwide following after the debut of his first book, Trout: An Illustrated History (Alfred A. Knopf, 1996). Published when he was only nineteen years old, the book featured watercolors of seventy species, subspecies, and strains of trout in North America. Prosek’s deep connection with the natural world in his boyhood surrounds, propelled him to travel and find connections with many vulnerable creatures and their habitats. These experiences serve as the foundation for his artwork and writing. For Prosek, making art, reading, and writing are equally intertwined activities. As he researches or writes, he often makes drawings in the margins of books or on pieces of paper. Likewise, he will add notes from his research to his drawings as they develop. 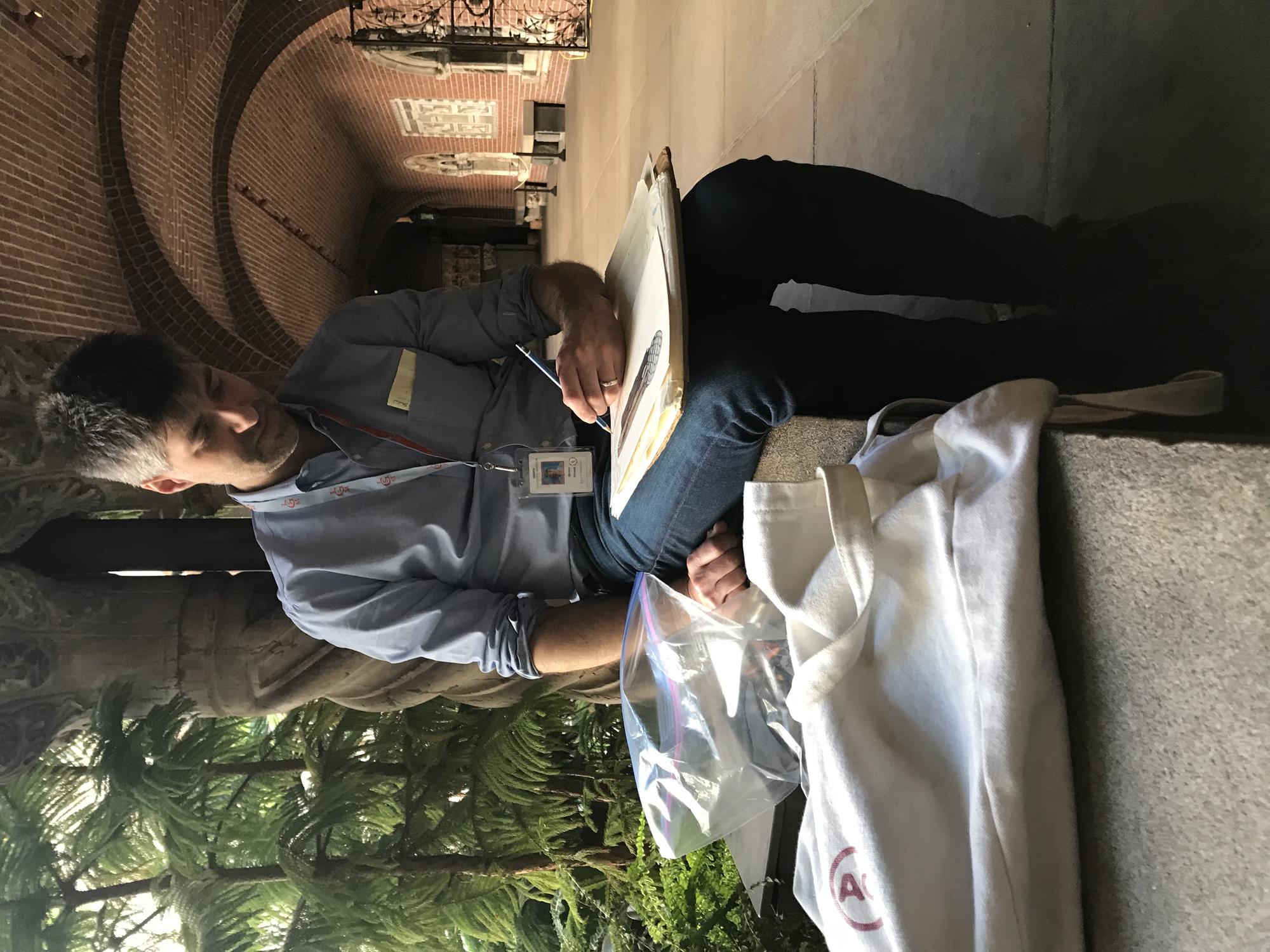 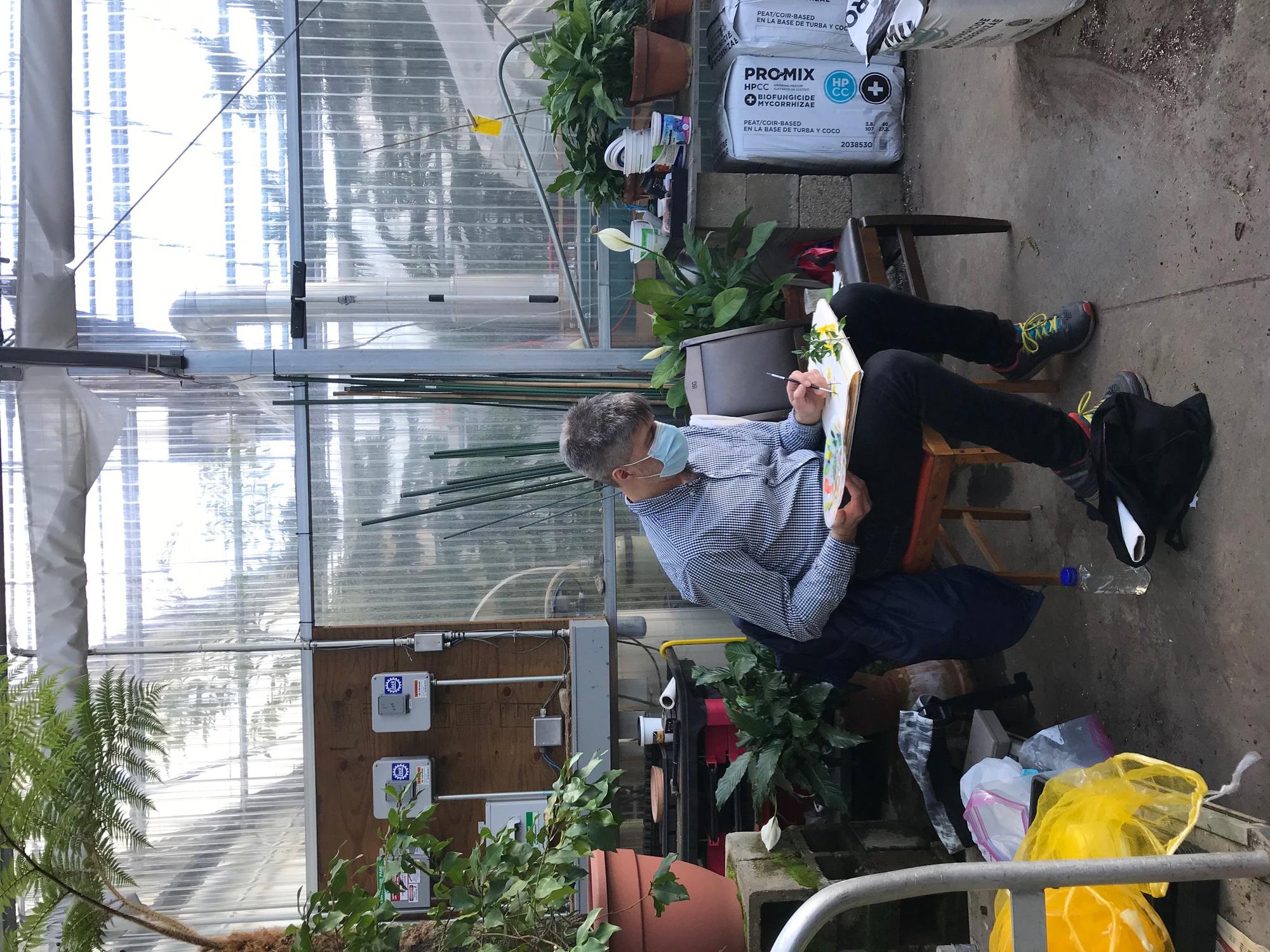 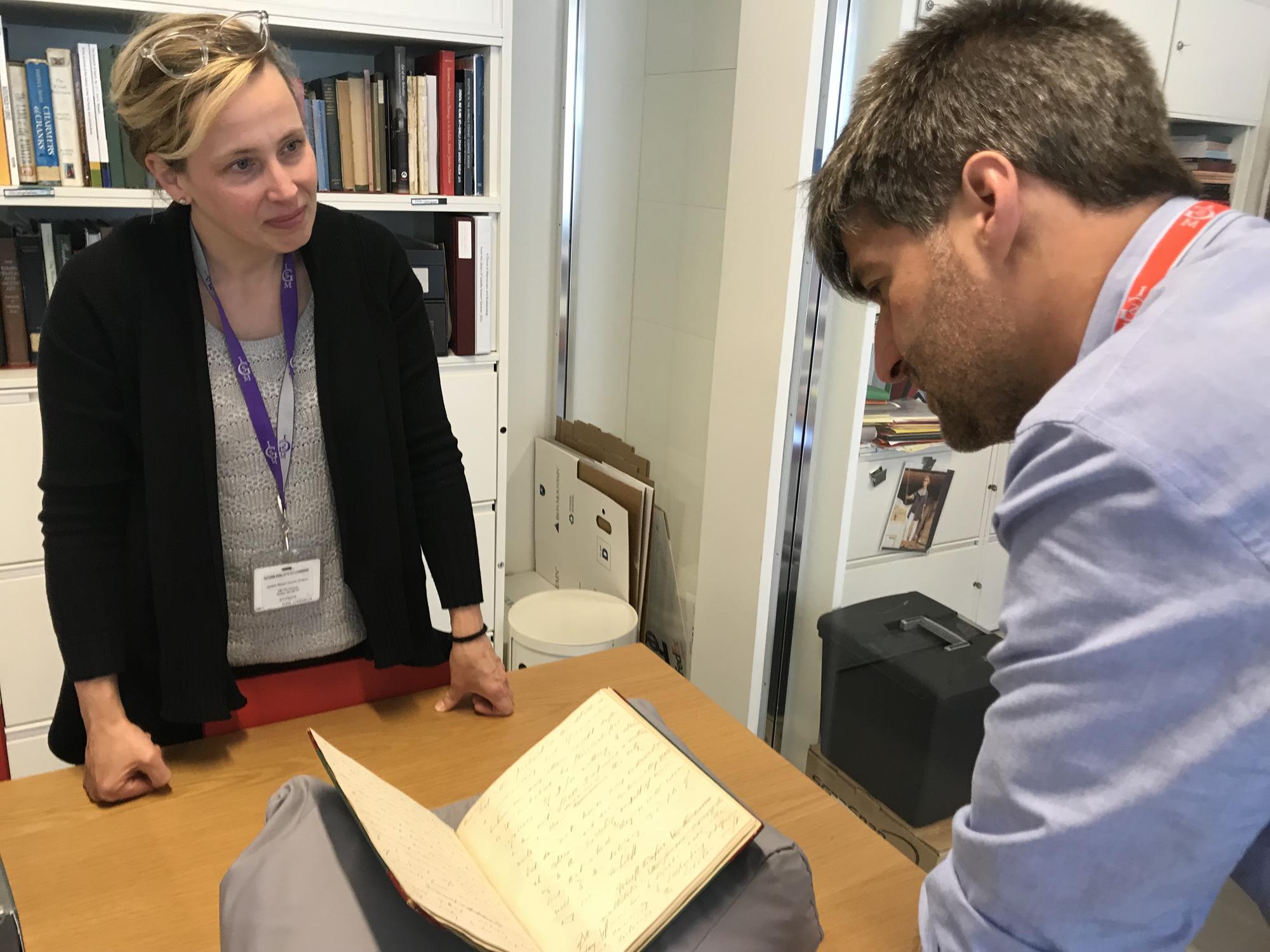 James Prosek drawing in the Courtyard, 2018

James Prosek, working on a drawing in the Hingham greenhouse, 2021

James Prosek approached his residency at the Museum in the same way he approaches his travels to the Kyrgyzstan mountains or, to the streams of Northern New Zealand, - as an investigation through drawing. Instead of a bird, or an eel, or moth, Prosek focused on a painting, a flowering jade plant, or rocks that Isabella Gardner collected and kept in her desk in the Macknight Room. Early one Saturday morning, Prosek sat and painted the Museum’s iconic hanging Nasturtium display and instantly captured its sense of wonder and surprise. Prosek notes, “Nasturtium time is particularly magical, where the blooms are literally spilling from the courtyard windows like cascades. It fortifies this idea of the whole place—the living material as well as the art—as a kind of Eden of Gardner’s making.” Since his initial residency in May 2018, Prosek has returned repeatedly to draw and to paint in the Courtyard, Greenhouses, Conservation Labs, and in the Artist-in-Residence apartment. The 50 or more studies of plants and objects he has drawn during his visits will be published as a special edition artist book in the Fall of 2022.

I’ve come to find, I’m not just investigating a place through drawing, but also the mind of an extraordinary woman, the museum’s founder.

During his time at the Museum Prosek spent days in the archives exploring Isabella Stewart Gardner’s photo albums of her 152 Beacon Street residence and Fenway Court, about 1922 (ARC.100031) as well as her travel albums and correspondence. Gardner pressed leaves and flowers into several of her scrapbooks as she traveled including the Travel Album of St. Augustine Florida and Cuba (1867-1886) which contains pressed seaweed. Prosek discovered examples of flora and fauna collected at locations symbolic to Isabella such as ivy from the grave of Richard Wilhelm Wagner, 1888; an olive leaf from Plato's Academy, gifted by Isabella’s nephew, William Amory Gardner, in 1886; and Ivy from poet Goethe’s Gartenhaus and a leaf from the rock where he and Von Stein sat, 1892 August 24 [from Earlier Author’s Case, Long Gallery] (ARC.006361). He also read Emerson's manuscript of an oration, The Method of Nature and a Letter with Bird Feathers sent to Isabella Stewart Gardner by Arthur Jermy Mounteny Jephson, from the Castle Mallow, County Cork, Ireland, 20 September 1891 (ARC.002245) 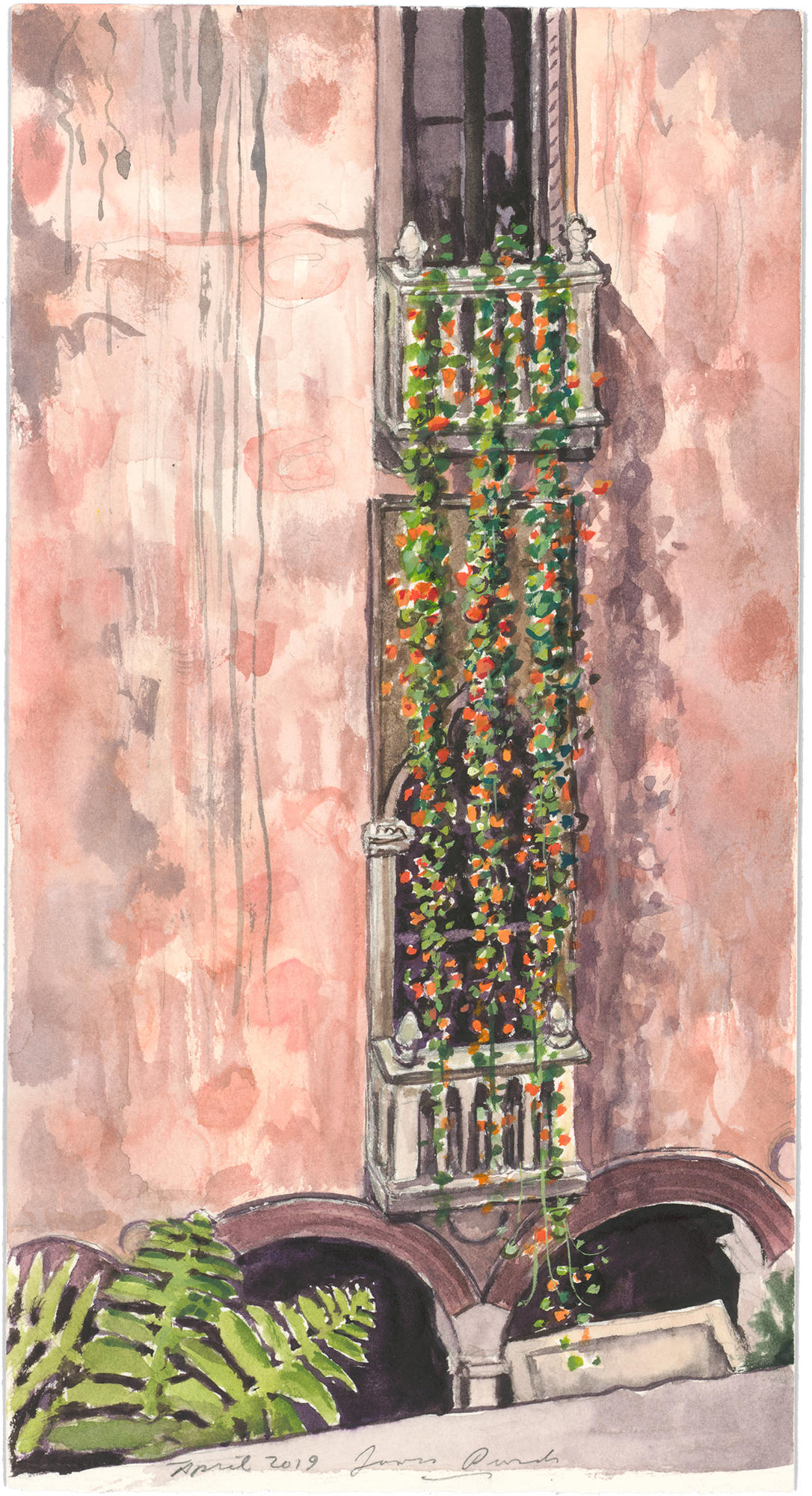 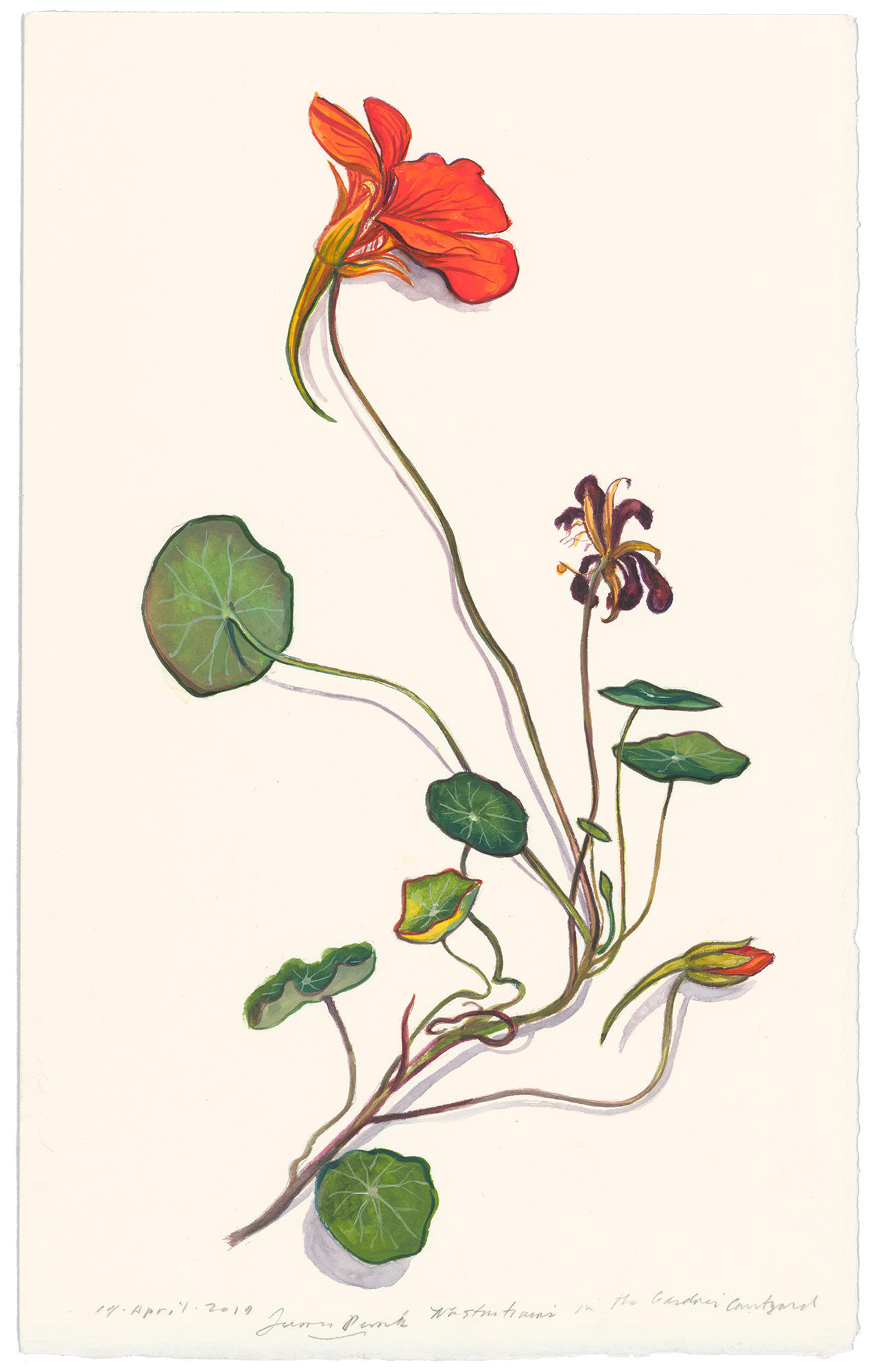 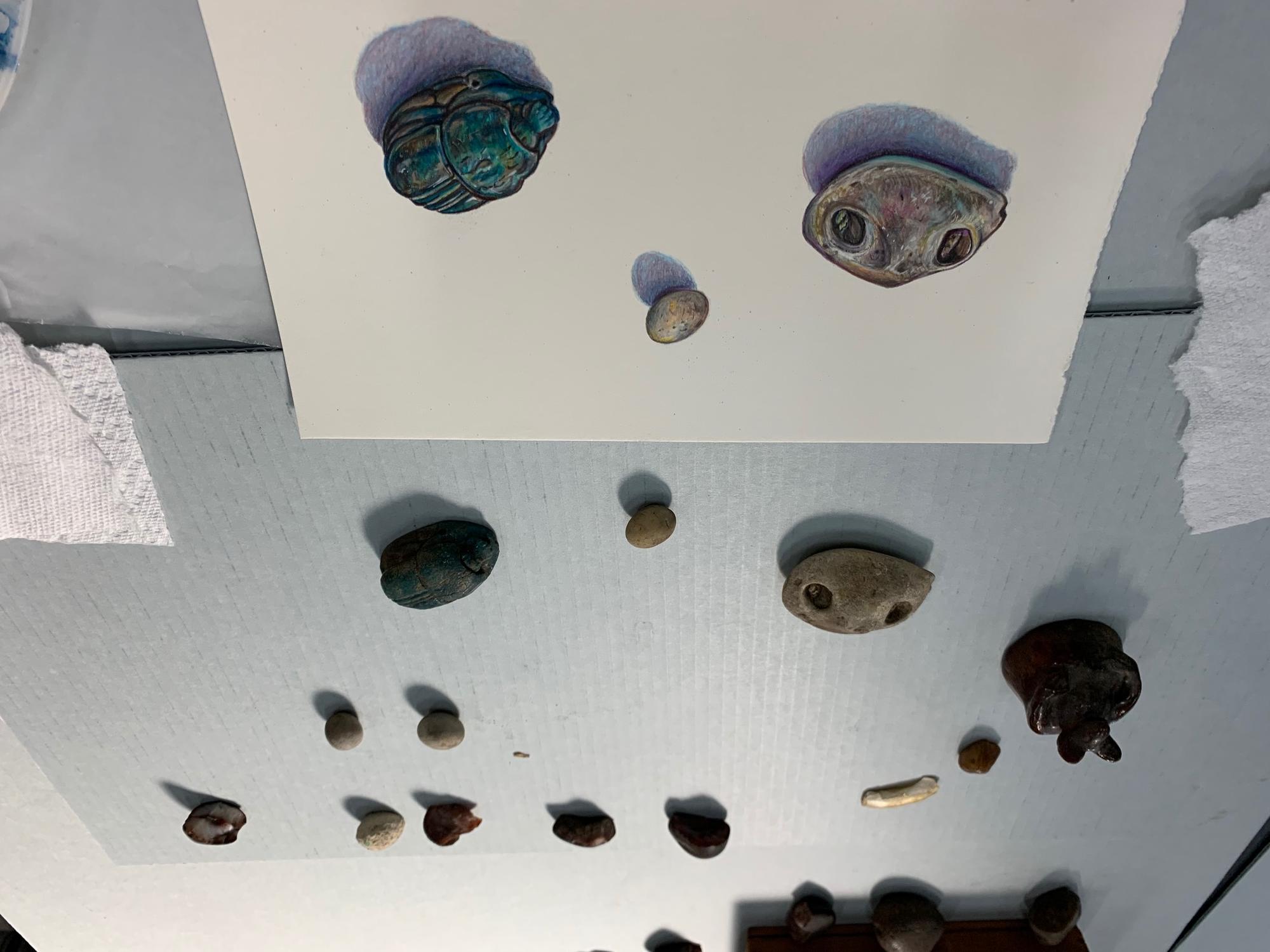 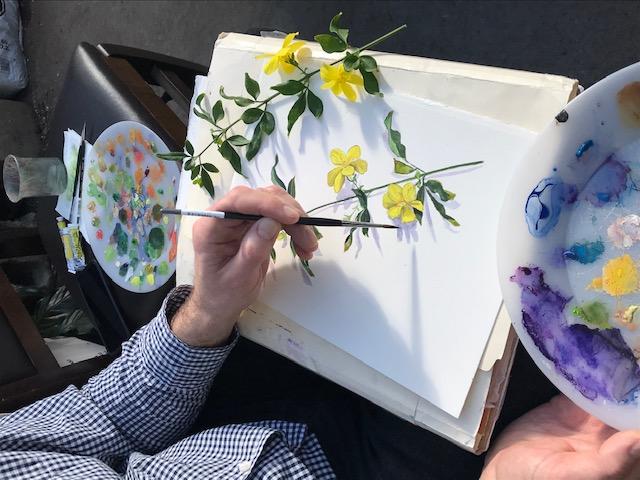 James Prosek (American, b. 1975), Nasturtiums in the Courtyard at the Isabella Stewart Gardner Museum, 2019. Watercolor on paper
ⓒ Courtesy of the artist and Waqas Wajahat, New York, 2019

James Prosek (American, b. 1975), Nasturtiums in the Gardner Courtyard, 2019. Watercolor on paper
ⓒ Courtesy of the artist and Waqas Wajahat, New York, 2019

In addition to his Gardner Museum residency, Prosek has been an Artist-in-Residence at the Yale University Art Gallery and the Addison Gallery of American Art. In 2002, He won a Peabody Award for his documentary on 17th-century author and angler Izaak Walton and his book The Complete Angler. In 2004 Prosek co-founded a conservation initiative with Patagonia founder Yvon Chouinard called "World Trout" which raises money for coldwater habitat conservation. Since the start of the program in 2005, the World Trout Initiative has given $2 million to over 200 fish conservation groups. Prosek has always been interested in exploring questions of how we name, systematize and order nature and the idea of hybrid beings. He lives and works in Easton, Connecticut.