Pietroiusti also spent a great deal of time in the galleries and in the archives examining Isabella Stewart Gardner’s book collection. Pietroiusti became fascinated in exploring time and the aging process of different materials; in particular, paper and vellum. Ann-Marie Eze, an Andrew W. Mellon Postdoctoral Curatorial Fellow, opened the world of Italian manuscripts to him. His curiosity for the construction and the vulnerability of paper was fueled by looking at several commissioni, or presentation copies of contracts for Venetian noblemen, stipulated between the mid-1400s and the fall of the Republic in 1797.

Pietroiusti noticed small impurities and blemishes on some of the pages of the books he was examining and wanted to know more about how, and why, these occurred. Gianfranco Pocobene, Head of Conservation, introduced him to paper conservator and specialist T.K. McClintock, who schooled him in the history and properties of paper and vellum. They looked at several examples of “foxing” and water damage on wallpaper and two large globes at his Somerville studio. McClintock later visited the Museum to discuss several of the books from the Collection with the Pietroiusti.

Pietroiusti photographed pages from twelve books in the Museum’s collection, which displayed noticeable effects of time–including impurities in the paper, mold, insects, use, and exposure to the elements. Several of the books were illuminated manuscripts and editions of Dante’s Divine Comedy. One unusual book had been given to Mrs. Gardner by Francis Marion Crawford. Crawford commissioned Tiffany & Co. in New York to interleave their personal copies of The Divine Comedy inside an exquisite binding of leather and silver of his own design.

Although this particular book had been looked at on many occasions, it was the first time in many years that every page had been turned. In doing so, Pietroiusti discovered that the interleaving was not consistent and that the book’s arrangement was “curated.” Some portions of the book had been woven together page for page but in other portions, larger sections of each book remained intact. In addition, he found that Gardner had pressed flowers within the pages. A single-stemmed flower appears in the Inferno, Canto XIII, verses 50-60. Here Dante and Virgil speak to an entrapped soul in Forest of Suicides. The second appears in the Paradiso, Canto XXIV verses 148-154. Gardner placed a sprig of three small bell-shaped flowers at the point where St. Peter affirms Dante’s belief in the Holy Trinity.

Pietroiusti returned to the Gardner for the opening of the New Wing and created a special project in the Education Studio. Over several days, members of the public were invited to create drawings on paper using different media each day, including salt water, beer, coffee, tea and iron dust, extracts from flowers and iron gall ink. These drawings were signed and dated by the artist and the maker and distributed for free to the following day’s participants. In this way, every person taking part in the workshop had the opportunity both to create a work and depart with one made by someone else. At the bottom of each drawing the artist included a caption that limits ownership so that the owner must give it to someone else within a certain time frame and under certain conditions. Cesare Pietroiusti has been producing drawings and distributing them for free since 2004. He has distributed approximately 100,000 of them to date. 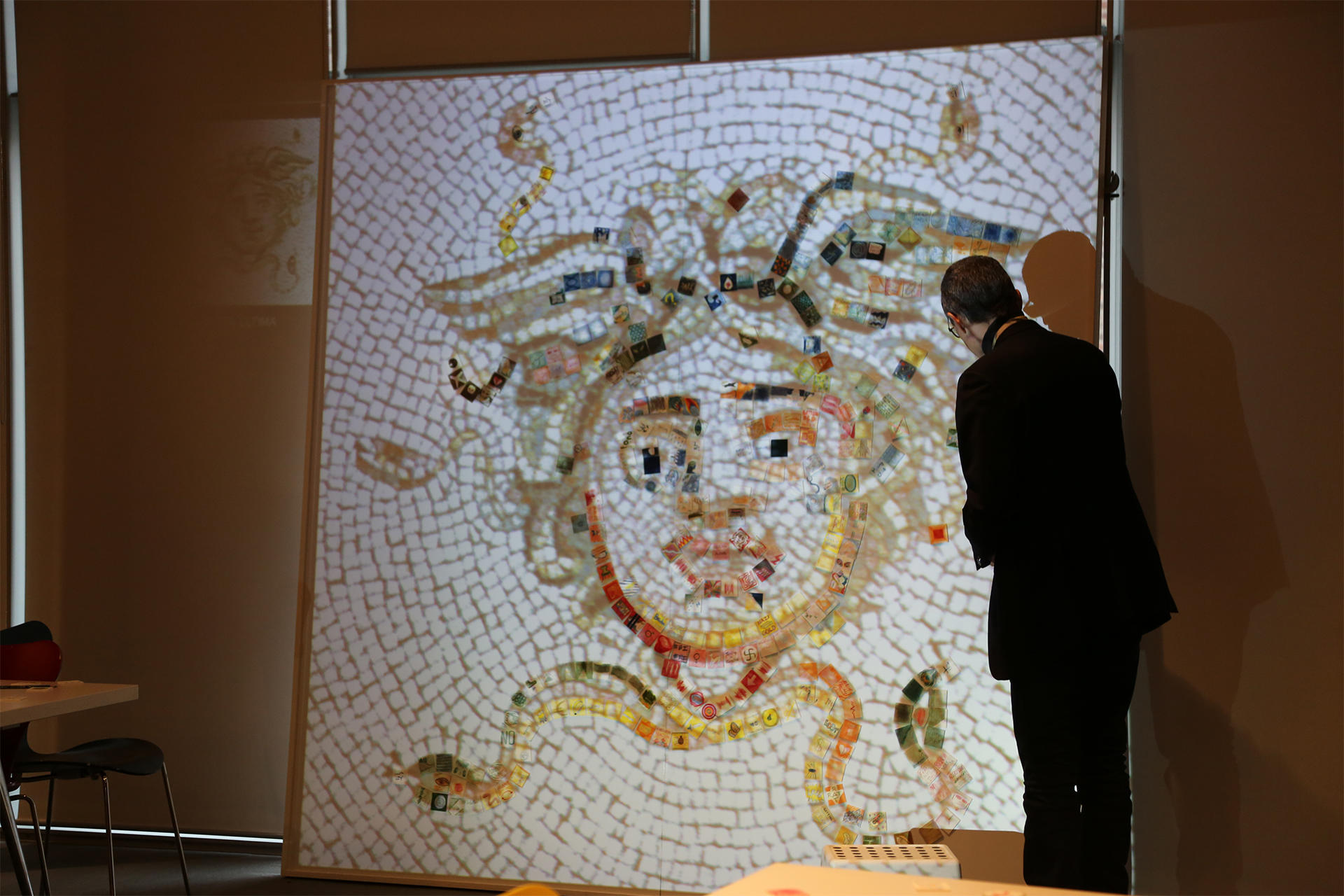 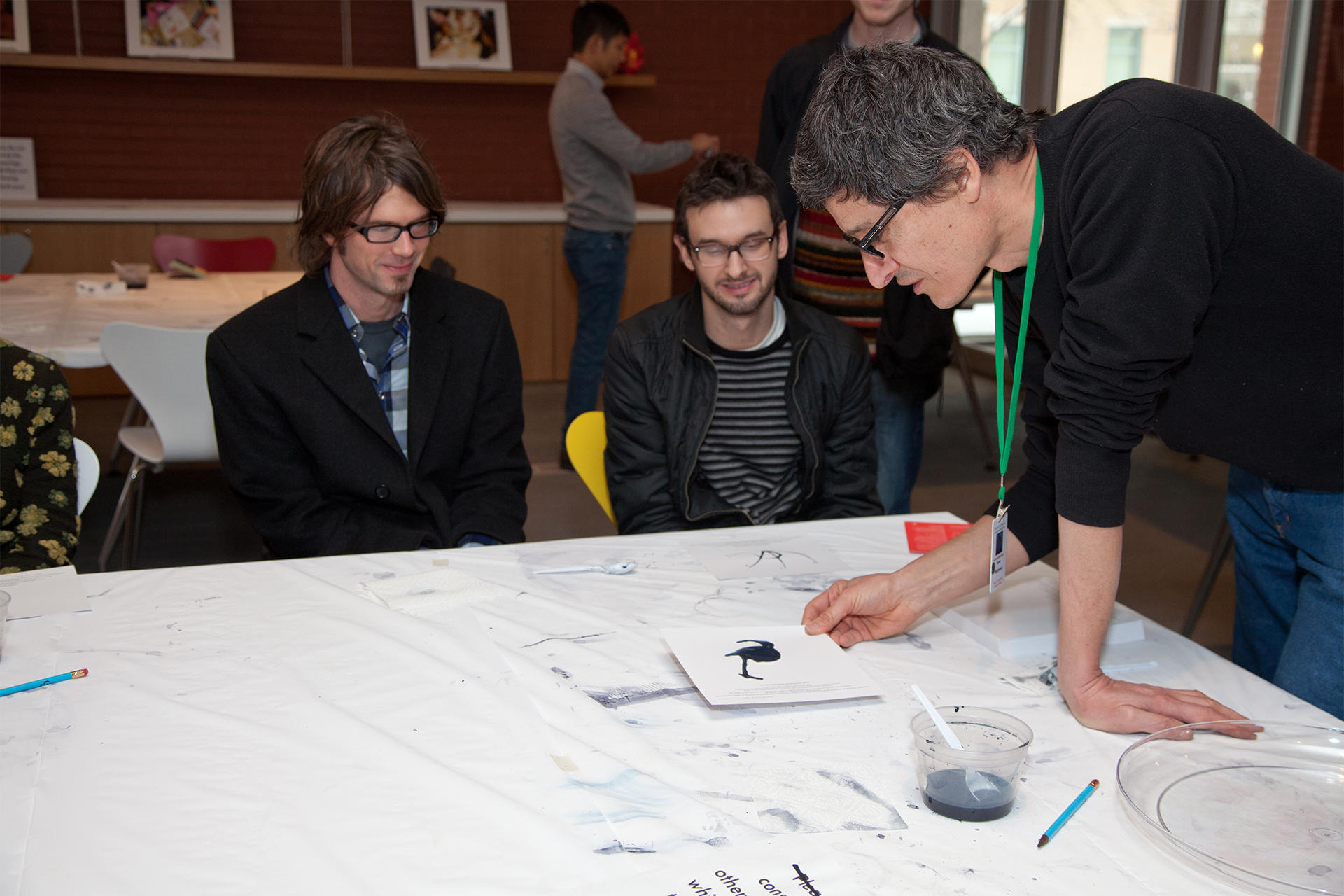 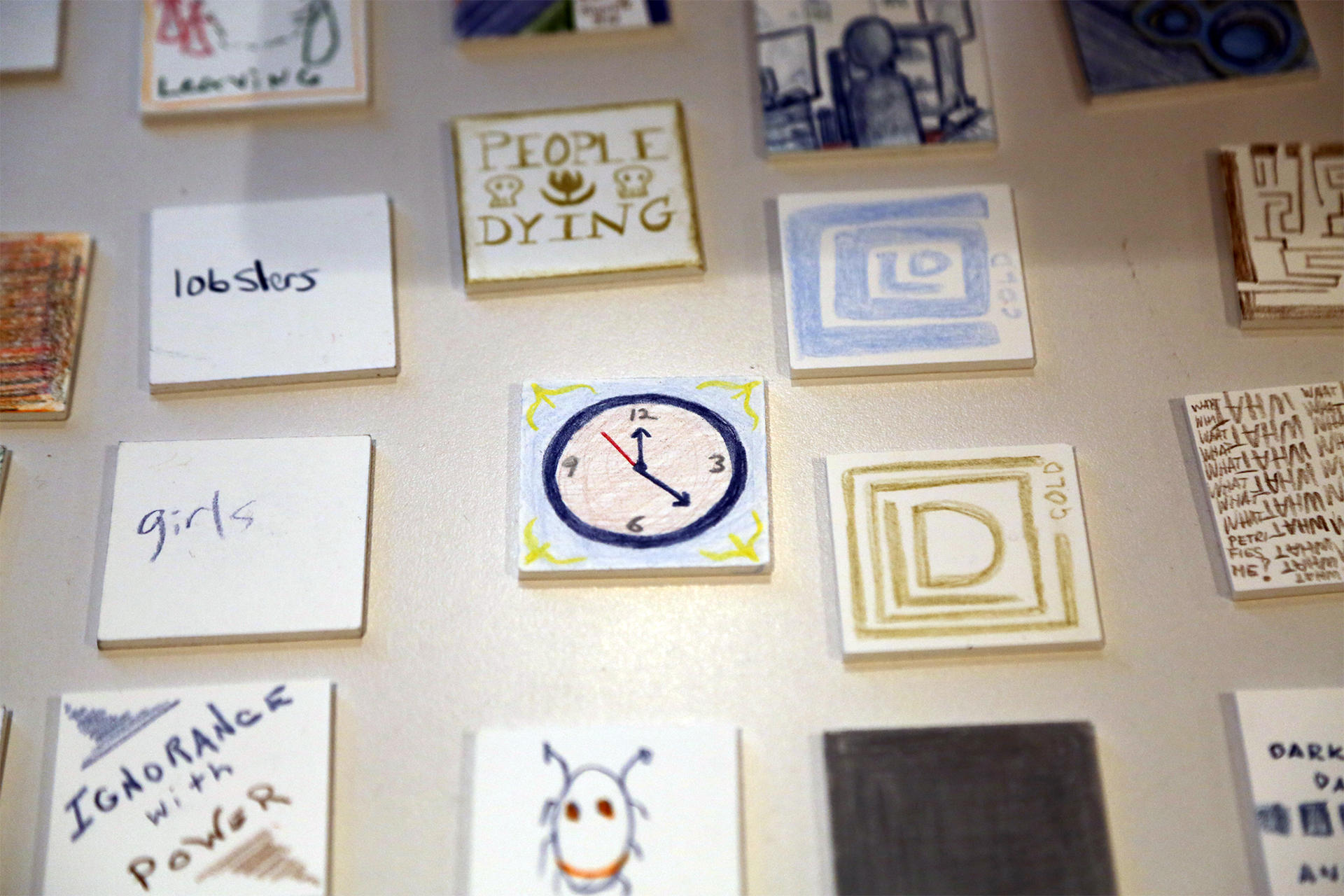 The work of Cesare Pietroiusti (b. 1955 Rome) is principally concerned with questioning ideas of art’s perceived worth, the logics of economy and consumption, as well as problematic and paradoxical situations that are hidden in common relationships and in ordinary acts. Pietroiusti works mostly in film, video, and performance. Several of his projects can be seen by following this link to the Franco Soffiantino Gallery site.

Pietroiusti’s practice often starts with assigning himself or others a task, or asking others to give him instructions. For a project at the Louisiana Museum, the artist spent seven days closed in a gallery space and lived each day with the food and the things selected by another person. His well-known Pensieri Non Funzionali (Non-functional thoughts) (1978 – 2008), is a work comprising approximately one hundred useless, parasite or incongruous ideas to be realized as art projects by anyone. In Pietroiusti’s words: “a ‘non-functional thought’ can be a way of observing fragments of reality, of creating connections among events, people, places, perceptions, or beliefs, an idea that is not directly determined by carrying out an activity, and therefore appears without a reason.” Various artists and curators have taken up some of these ideas, including the exhibition Democracy! at the Royal College of Art, London in 2000.

Together with the collective Space (Bratislava), Pietroiusti founded Evolution de l'Art, the first contemporary art gallery to deal solely with immaterial artworks. He is one of the founders of the magazine Rivista di Psicologia dell'Arte, as well as the Jartrakor Study Center in Rome, an art gallery and an area of experimental aesthetic, and the international artist collective Nomads & Residents. Among other activities, N+R organizes and circulates the Traveling Magazine Table, a collection of independent publications by international artists, artists’ collectives, alternative art spaces, and other collaboratives. From 1996-2000 Pietroiusti was the Editor of Aperture magazine before coordinating artistic projects at the Clocktower, New York, from 2000-2001. In addition, Pietroiusti works with the Oreste Project, a variable group of people, mainly visual artists, but also curators and others, who try to create free and operative spaces for developing ideas and projects, artworks and exhibitions, through meetings, communitary experiences and any other possibility of relations between persons.

Cesare Pietroiusti has participated in three Venice Biennale, including the 50th in 2003 where he presented Riserva Artificiale, a collective work with a group of students from the local Academy of Fine Arts. This project explored the narratives of people and places of Porto Marghera, the industrial area of Venice. He participated in the 2009 Tirana International Film Festival, Albania; Performa 07, New York; and has had solo projects at Galleria Franco Sofflantino, Torino (2009); MaMbo, Bologna (2008); the Ikon Gallery, Birmingham (2007); Palazzo Bricherasio, Turin (2003); Art in General, New York (2001); Serpentine Gallery, London (1992); and at the Louisiana Museum, Humlebæk (1996). He has had residencies at the Headlands Center for the Arts, San Francisco; at the Civitella Ranieri Center, Umbertid; and at the Rijksutstallningar Summer Academy (Ramnas, Sverige). He has taught at the Laboratorio delle Tecniche e delle Espressioni Artistiche, IUAV University, Venice and The Art Institute of Boston and has was invited to be a visiting artist at MIT CAVS program. Pietroiusti graduated with a degree in Psychiatry in 1979 with a dissertation on “Effects of suggestion in psychotherapy”. He lives in Rome and New York.