Porsha Olayiwola is a writer, performer, educator and curator who writes and performs poems rooted in afro-futurism and surrealism. These works often examine historical and current issues in the Black, woman, and queer diasporas and body politics. Olayiwola started writing when she was young, before she named it poetry. Her residency at the Gardner in 2021 was spent mainly writing and thinking, allowing her to step back and have the freedom to explore new ideas without a specific agenda. Olayiwola explored the Collection and spent time in the galleries where she captured selfies of herself in front of different works of art before the Museum opened to the public. While visiting the Conservation lab, she saw a variety of objects being treated as part of the Titian Room renovation project and spoke to conservators about their methods.

Research is an intrical part of Olayiwola’s practice so spending time in the Archives was of special interest to her. Olayiwola examined materials collected by Isabella Stewart Gardner that relate to the 19th century writers Walt Whitman and Ralph Waldo Emerson and researched and read correspondence to Gardner from Boston based writers Amy Lowell, Annie Fields, Sarah Orne Jewett, and T.S. Eliot. She read through Gardner’s Commonplace Book (1868-1869) that contains a variety of efemera and news clippings that Gardner collected as well as poetry and phrases she hand copied into the book in French, Italian, and English.

Olayiwola has been exploring themes of water and the ocean in her work in terms of the sensations it elicits as it touches the body and the emotions and memories that are evoked as a result. In the archives she became interested in researching pearls that appear in the Collection, such as the pearl worn by Mary Tutor in her engagement portrait and files that contain information about Gardner’s famous strand of pearls that are featured in her iconic portraits painted by John Singer Sargent and Anders Zorn.

Porsha Olayiwola has been a long-time collaborator with the Museum and has performed at the Gardner several times, delivering a hybrid of meditations on Boston, Blackness, gender identity, and more in both the Palace building and in Calderwood Hall. As an educator and organizer She seeks to cultivate spaces for artists and audiences to allow them to deepen their understanding of craft and community. In 2018 she was invited to be a Gardner Neighborhood Salon Luminary, a forum of exchange and dialogue with Boston's most innovative and thoughtful influencers which then helps inform the programming offered at Gardner. In 2022 She will continue her work as an Artist-in-Residence and as a collaborator by doing a performance and contributing a newly commissioned poem for the exhibition, Being Muholi: Portraits as Resistance, February 10 - May 8, 2022. 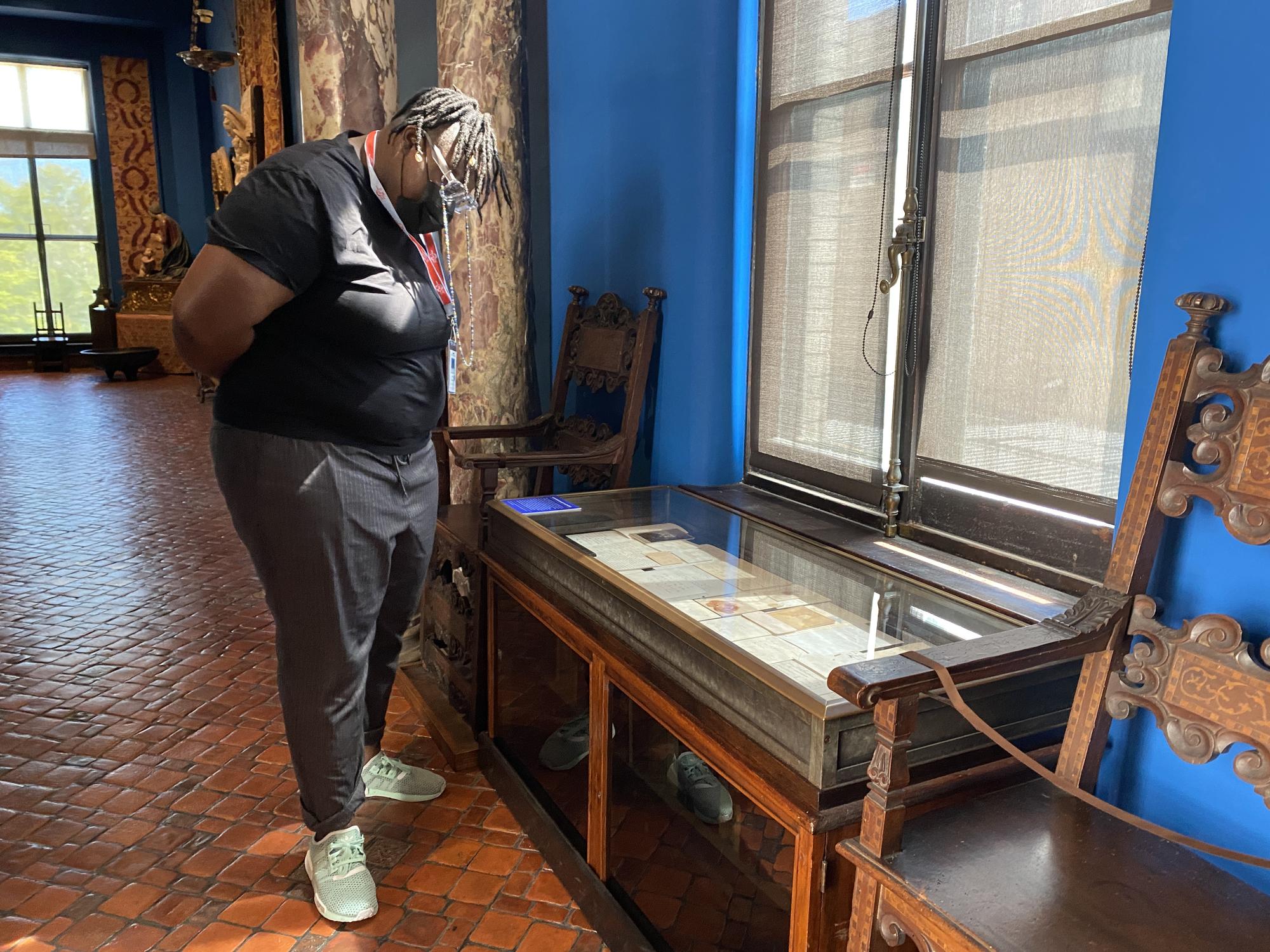 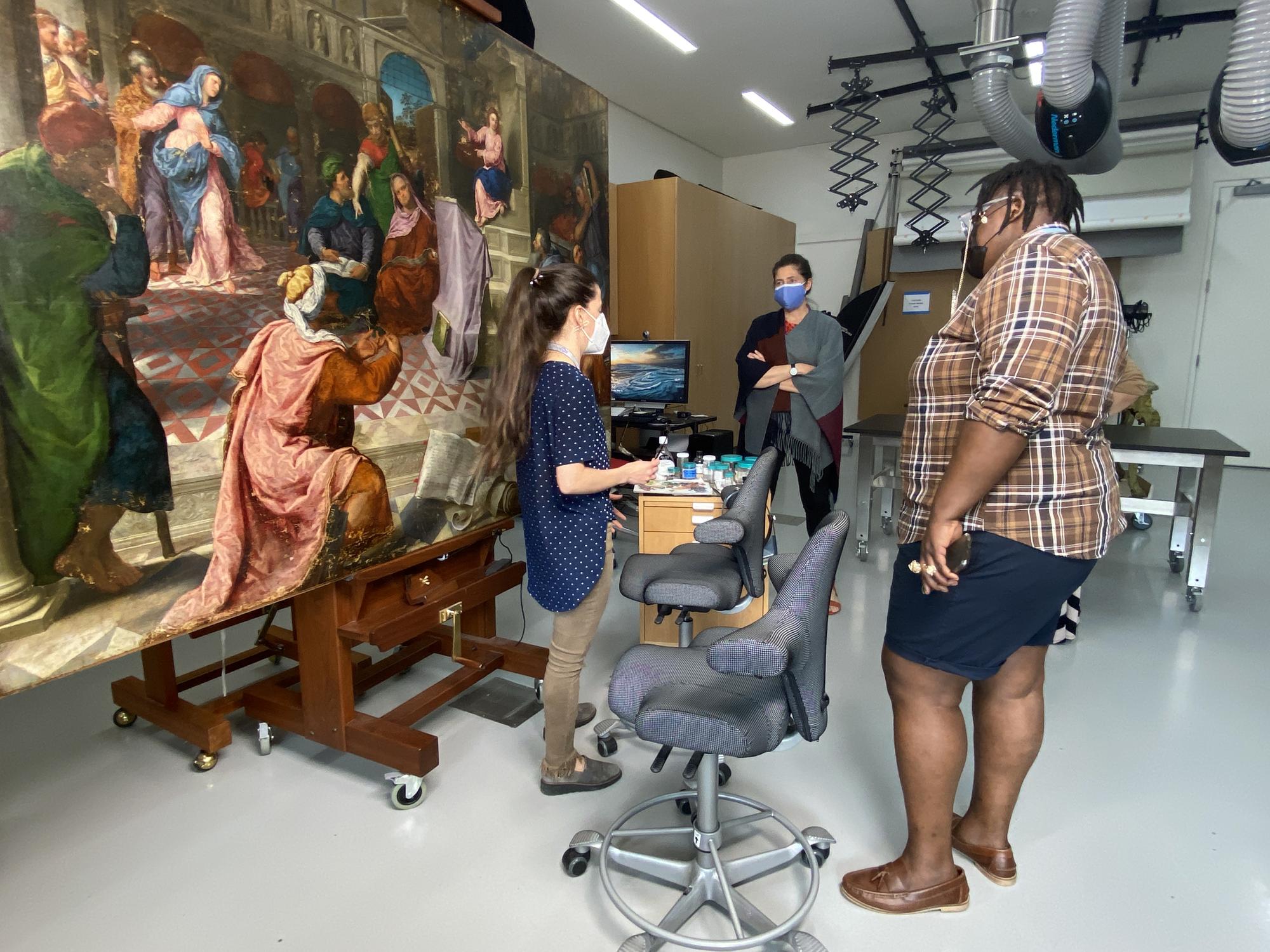 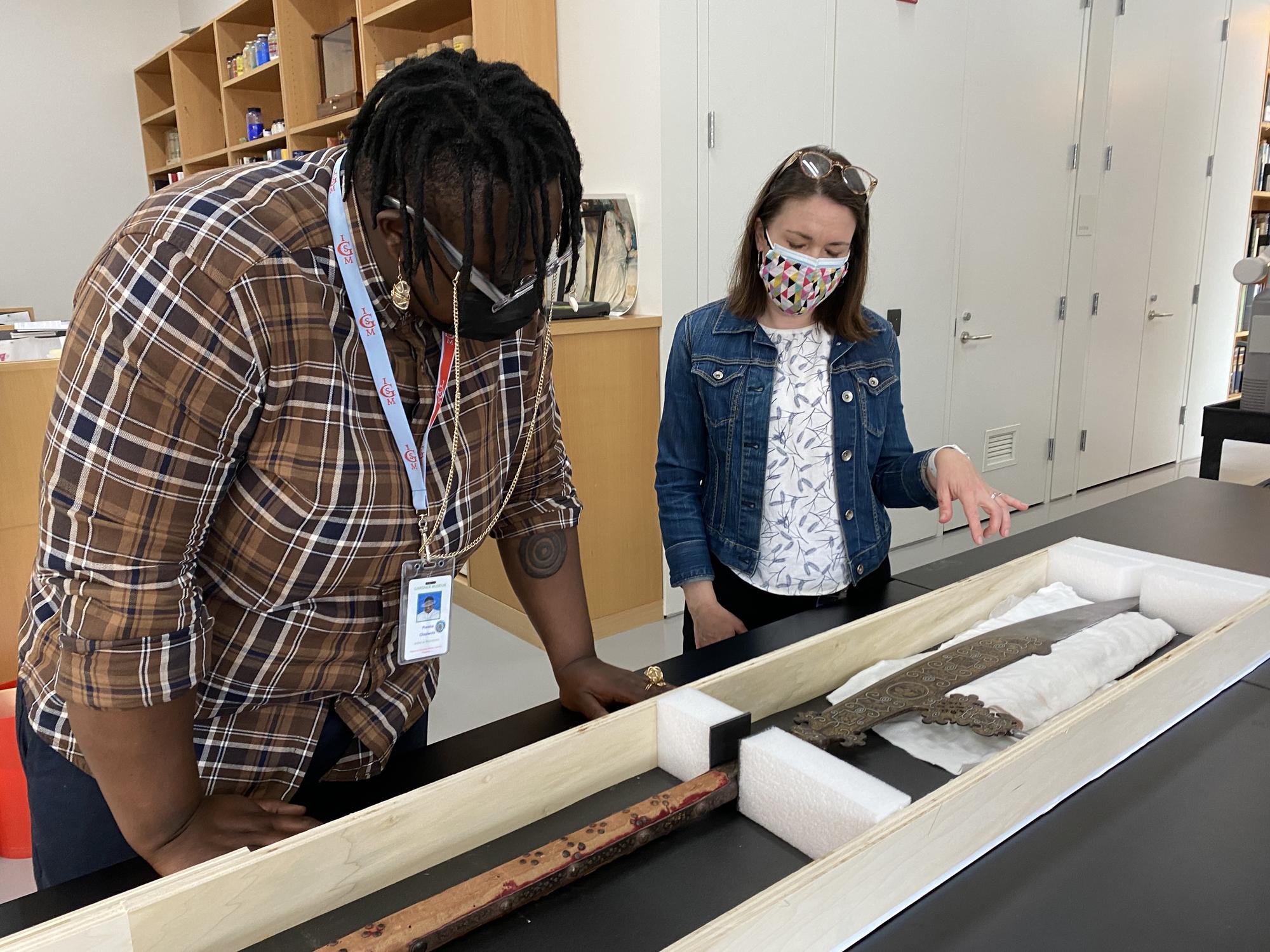 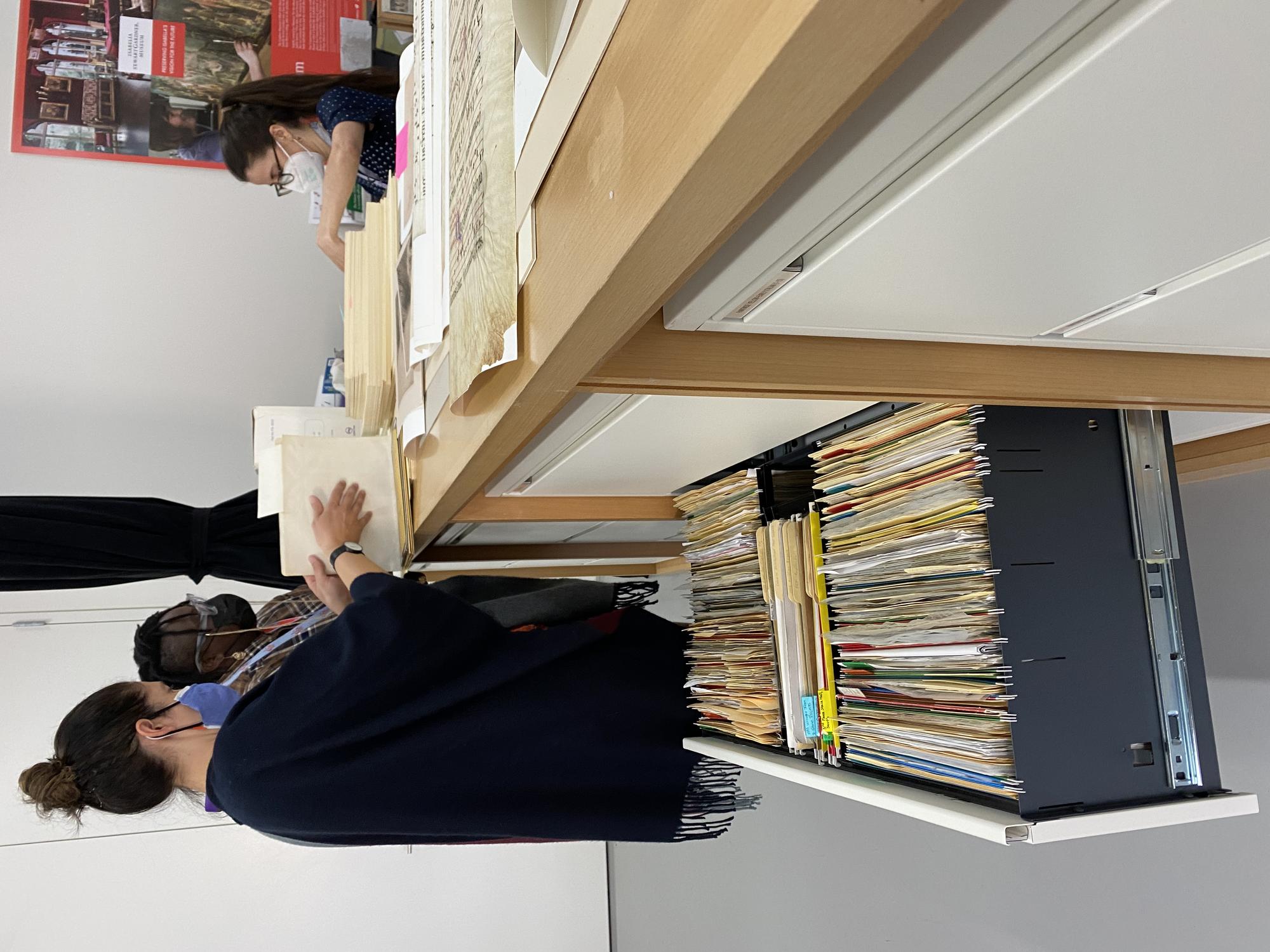 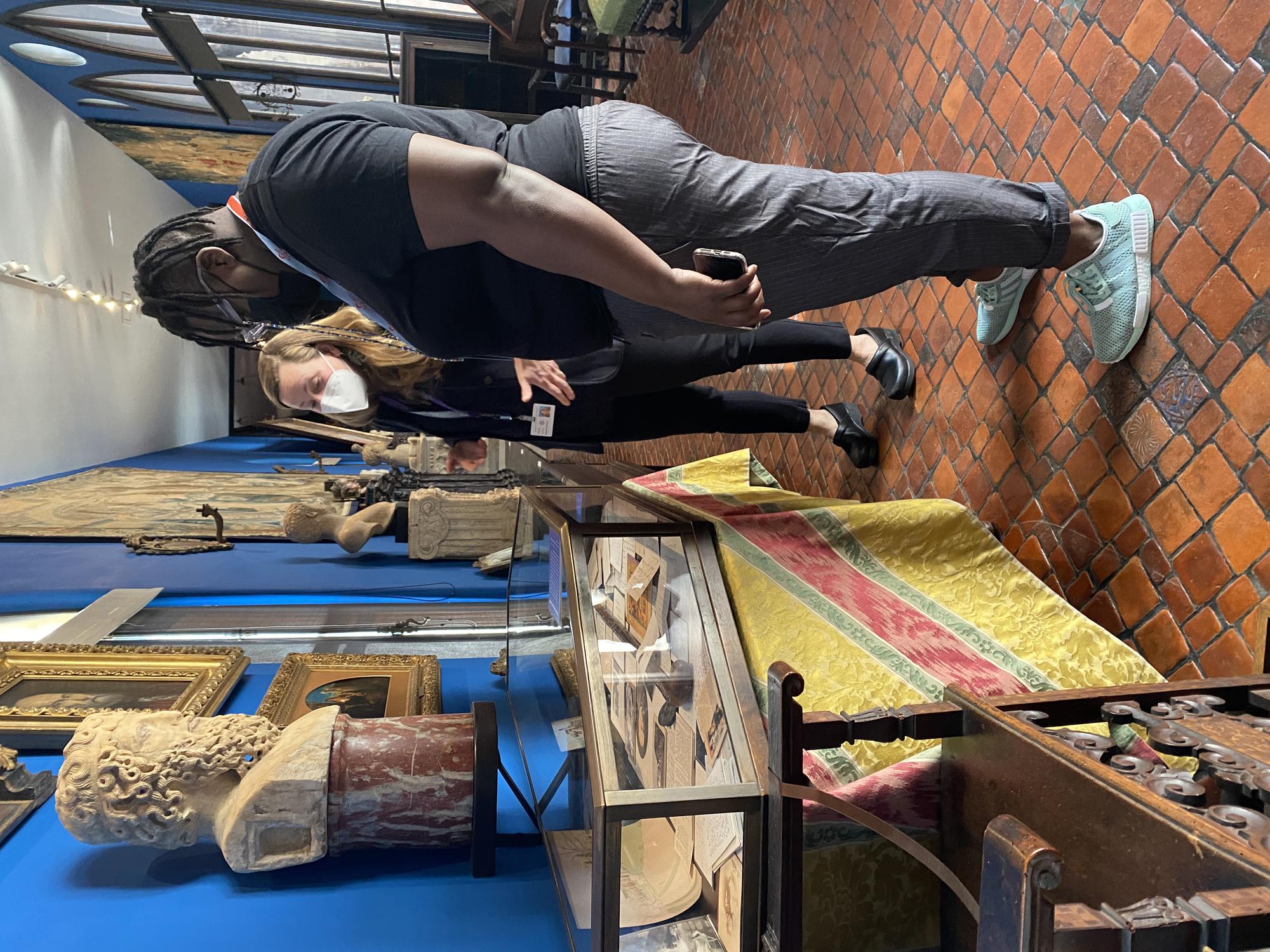 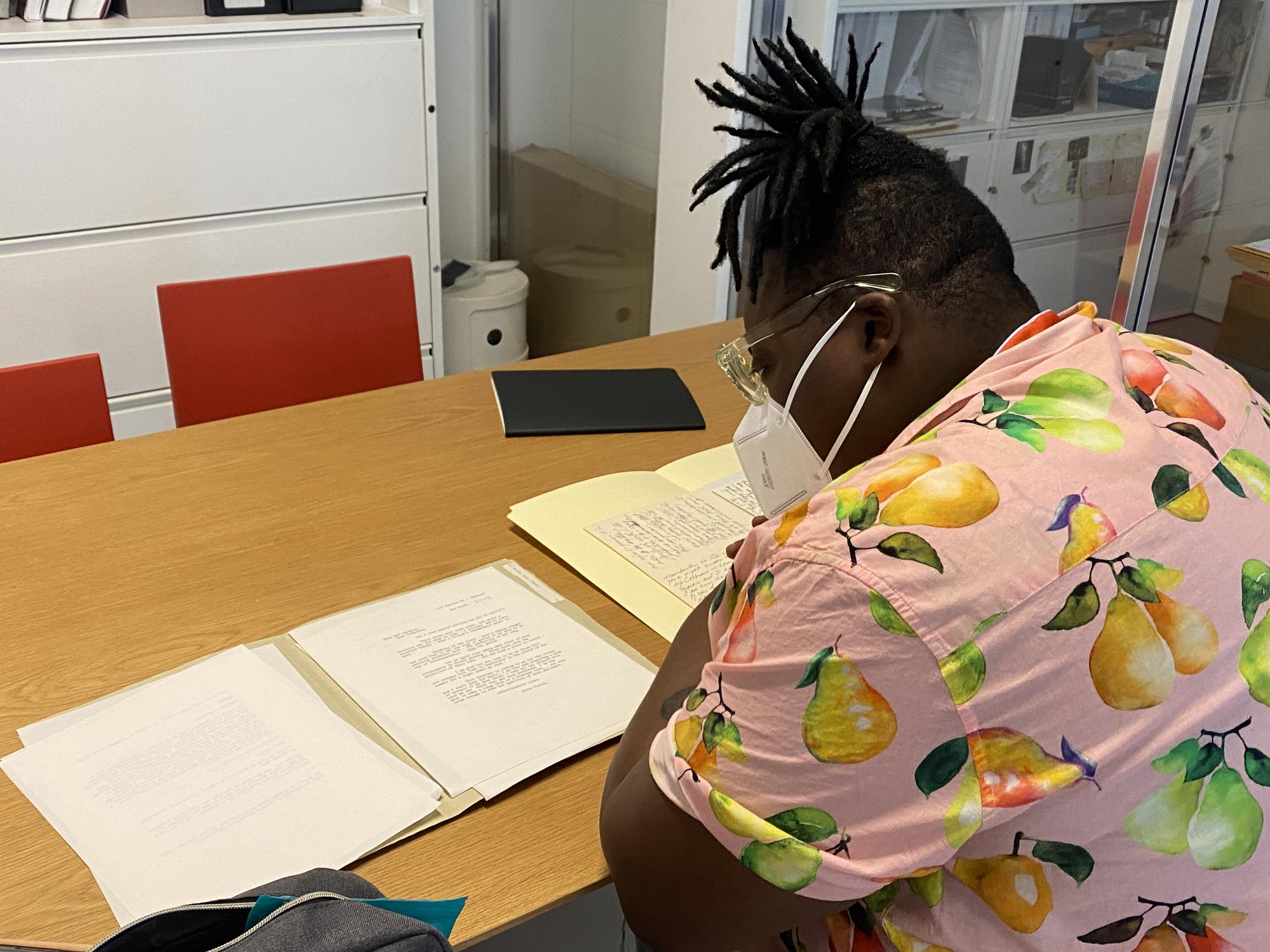 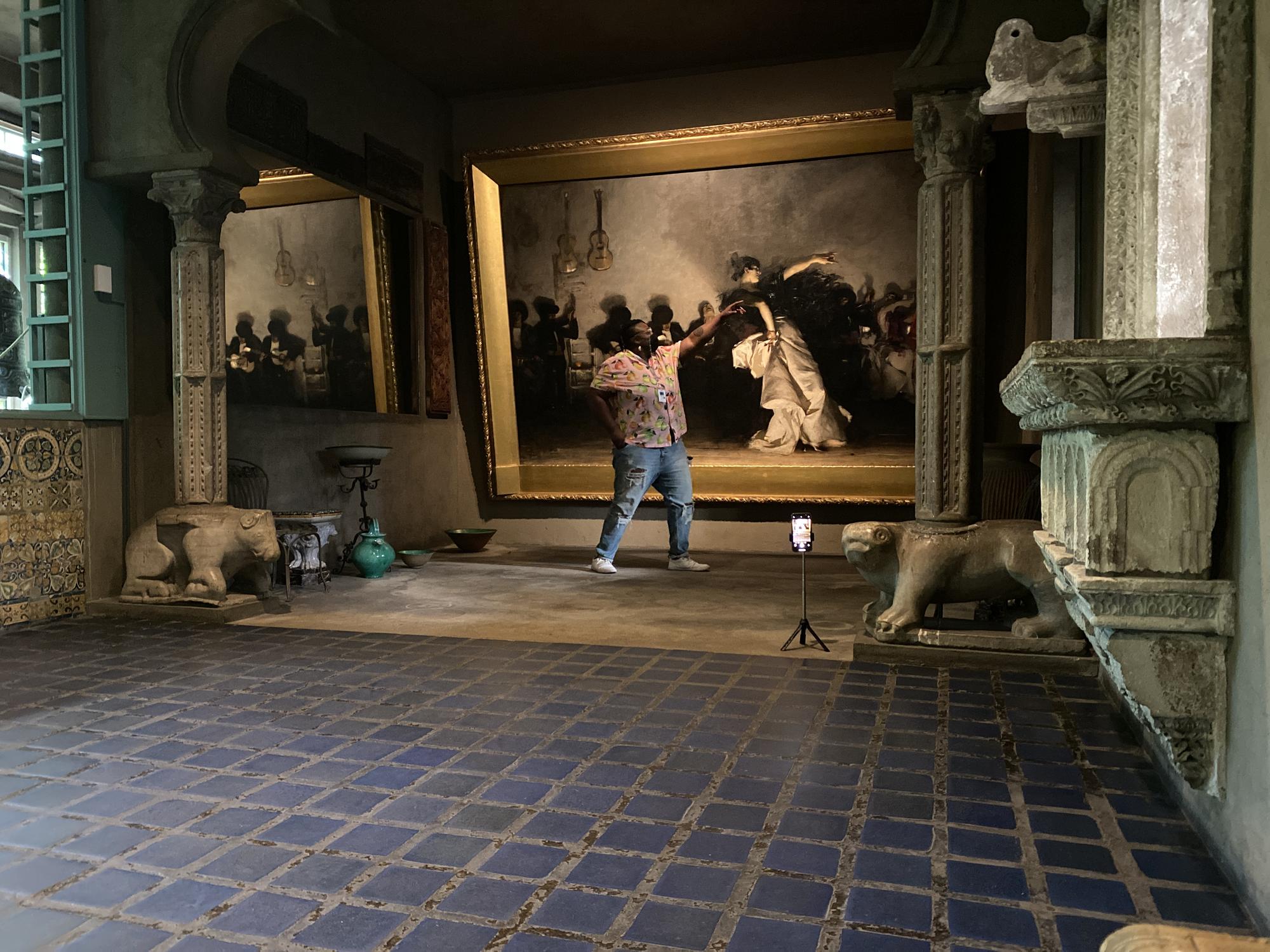 1. Porsha Olayiwola, looking at letters and ephemeria in the Long Gallery Cases, 2020.

2. Conservators discuss their process of cleaning and restoring Paris Bordone, Christ Disputing in the Temple, 1543-1547, with Porsha Olayiwola the Conservation Lab, 2020.

5. Archivist Shana McKenna guides Porsha Olayiwola through the correspondents and ephemera from Gardner's friends that are housed in the Long Gallery Cases, 2020.

6. Porsha Olayiwola researching in the archives, 2020.

7. Porsha Olayiwola taking a selfie in front of Sargent's painting El Jaleo, 1882, in the Spanish Cloister, 2020.

Porsha Olayiwola is the Poet Laureate for the City of Boston (2019-2022) and author of the collection, i shimmer sometimes, too (Button Poetry, 2019). During her time as Poet Laureate she led free readings and discussions for students in the Boston Public School system, residents of Boston (HOME series), and did writing workshops with inmates at MCI-Concord. She is the Artistic Director of MassLEAP, a non-profit literary organization serving youth artists and the co-founder of The House Slam, an open mic poetry slam at the Haley House Bakery Cafe. She also established the Roxbury Poetry Festival which was first held in the summer of 2021. Olayiwola is an Individual World Poetry Slam Champion (2014), the National Poetry Slam Champion (2015) and was named by GK100, an esteemed recognition awarded by Get Konnected!, the Boston Foundation, and the Greater Boston Chamber of Commerce, as one of Boston’s Most Influential People of Color (2018). Olayiwola earned her undergraduate degree from the University of Illinois Urbana-Campaign in African-American Studies and Women and Gender Studies and is an MFA Candidate at Emerson College. She is a native of Chicago who now resides in Boston.

...writing is never my favorite part of the process, but rather the research, and mediation required before the poem is written. The conversations I have with my god, my muse and myself before I embark on any poem is always a mental journey into revelation.