From the moment she arrived, Sonya Clark dove deep into the collection and archives to explore a vast array of interests and objects. For Clark, objects contain complex histories of representation, identity, and community. She simultaneously weaves and unravels legacies of African-American heritage in her work, utilizing cultural objects like combs, coins, textiles, seed beads, and human hair. The residency at the Gardner in September, 2019 gave her the opportunity to investigate new materials and the space to kick off a project she had recently started into high gear.

Clark spent time in the galleries where many details caught her attention: mirrors, gilding, tassels, marks created over time, and the sand Gardner collected in Giza on her trip to Egypt in 1875. In the Conservation Labs she learned about the Titian Room restoration project and the extensive research that has been done of the textiles in the room and the process of rehanging the wall coverings in the Gallery. She viewed objects and talked to conservators about their work on a pair of 19th century Japanese candlesticks and a 17th-18th century gilded and painted iron and wood altarpiece that Gardner placed underneath the stairs leading to the second floor. However, the object in the Lab that truly captured Clark’s imagination was a box containing a variety of “please do not touch” labels made in different years and on different materials that the Conservation staff had recently taken out of the galleries and replaced with a new, consistent design. 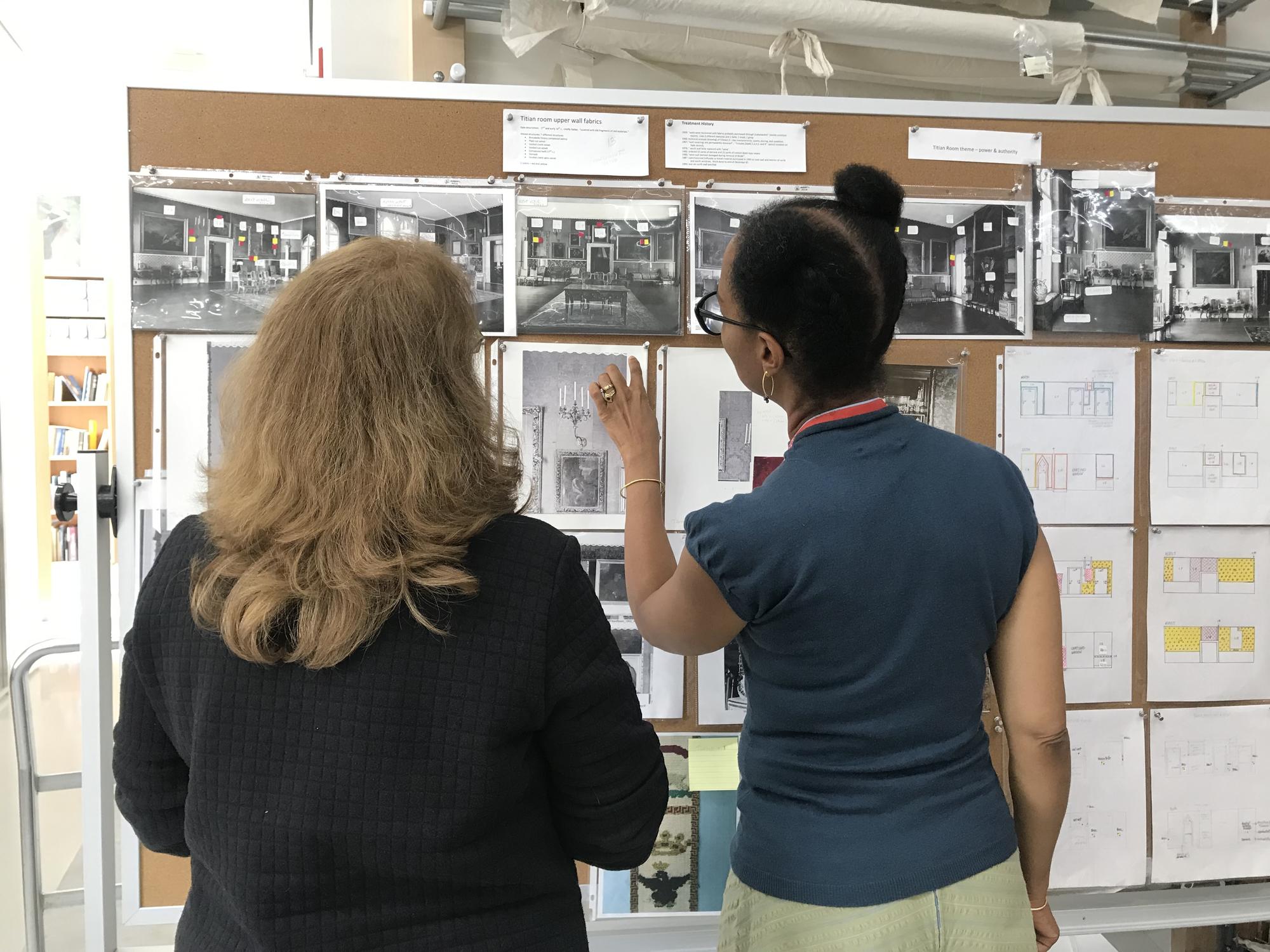 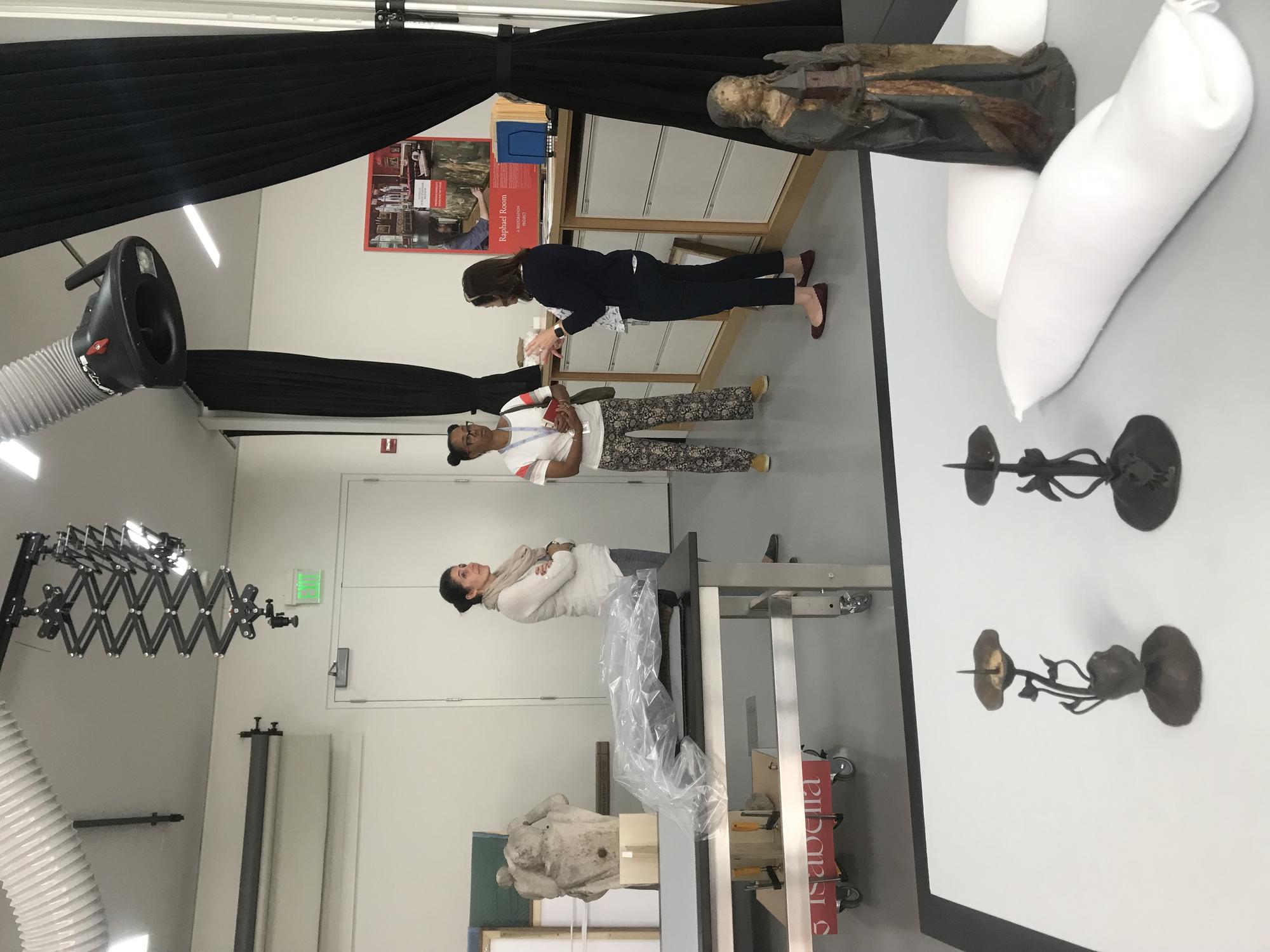 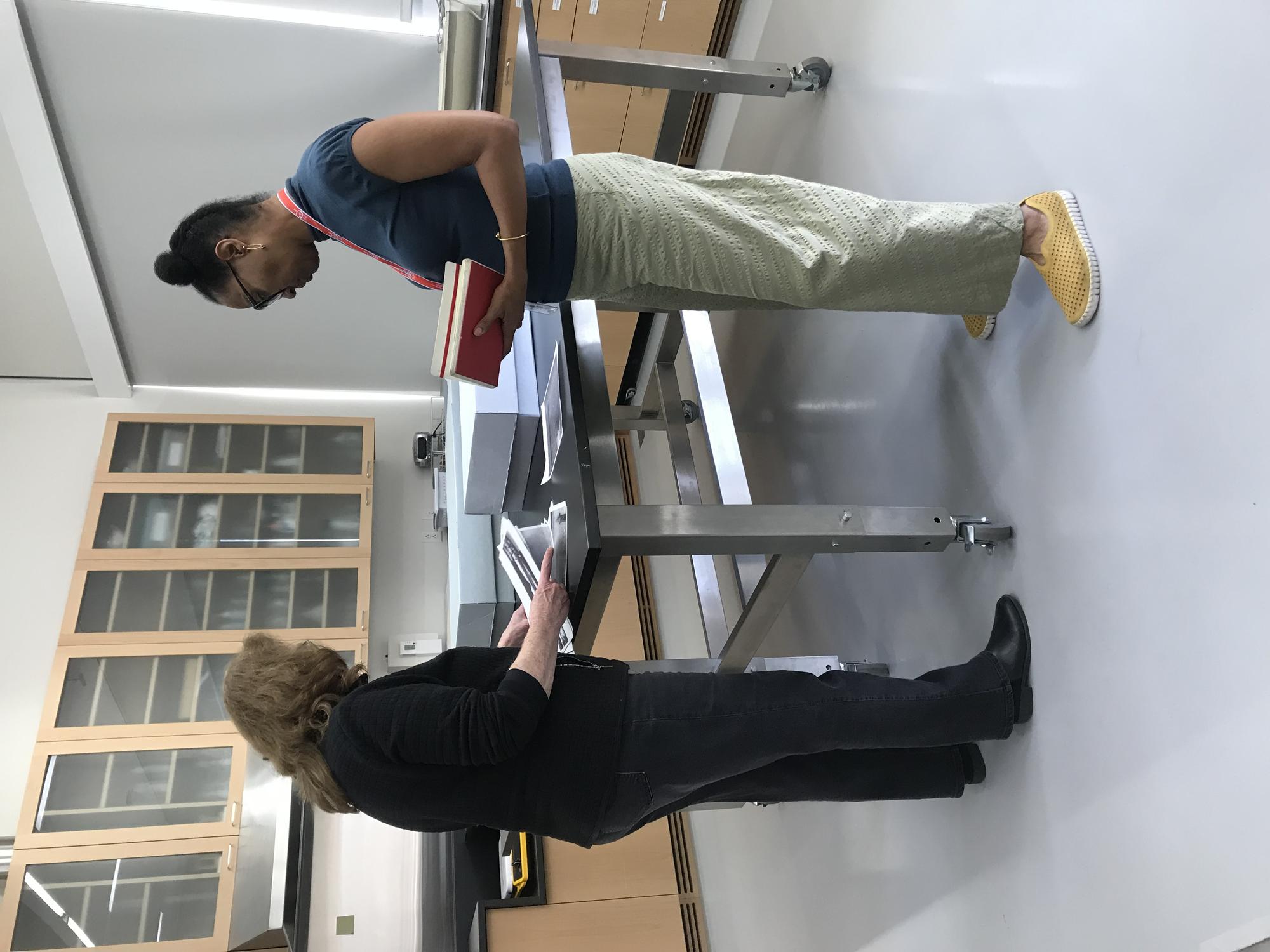 Clark made multiple trips to the archives where she looked through items related to astronomy, read letters and poems, examined keepsakes, and spent time with several of Isabella Stewart Gardner’s travel albums and personal notebooks. These included the volumes of Northern and Eastern Europe, 1867, Western United States, 1881, and Florida and Cuba 1886; Great Britain, 1879; and Japan and China, 1883. She also viewed Gardner's Recipe Book and her Commonplace book that Gardner had filled with newspaper clippings, ephemera, and handwritten quotes in the years 1865-66 and 1868-69.

The poetry and politics of Black hair care are central to Clark’s work as an artist and educator. She uses this personal fiber to explore how hairdressing and its tools reflect the nuances of race and being Black in America. Clark was excited to examine several mementos of hair that Gardner collected from her friends and of others she admired. These included Robert Browning, John Keats, Nathaniel Hawthorne, Franz Liszt, and F Marion Crawford. 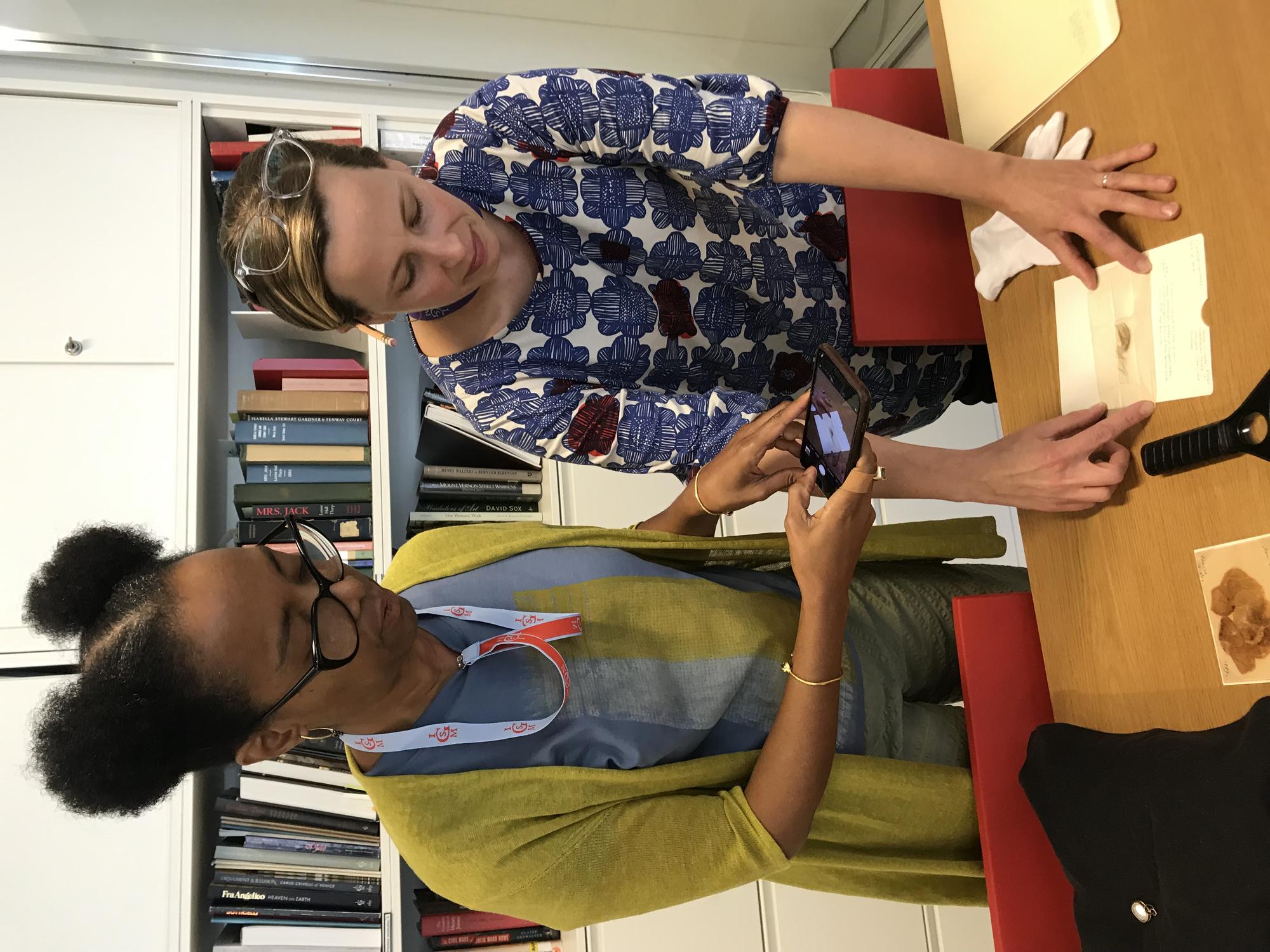 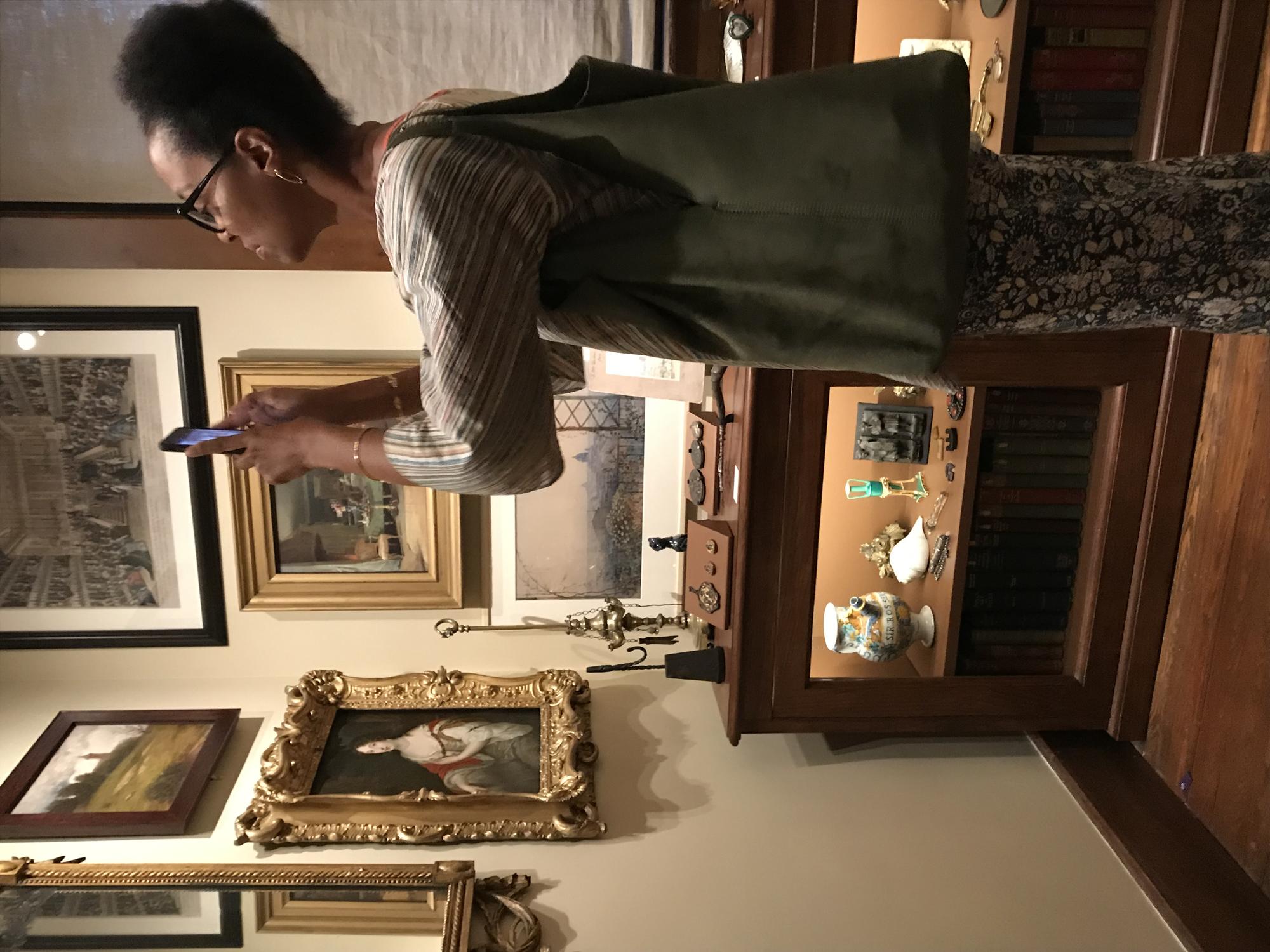 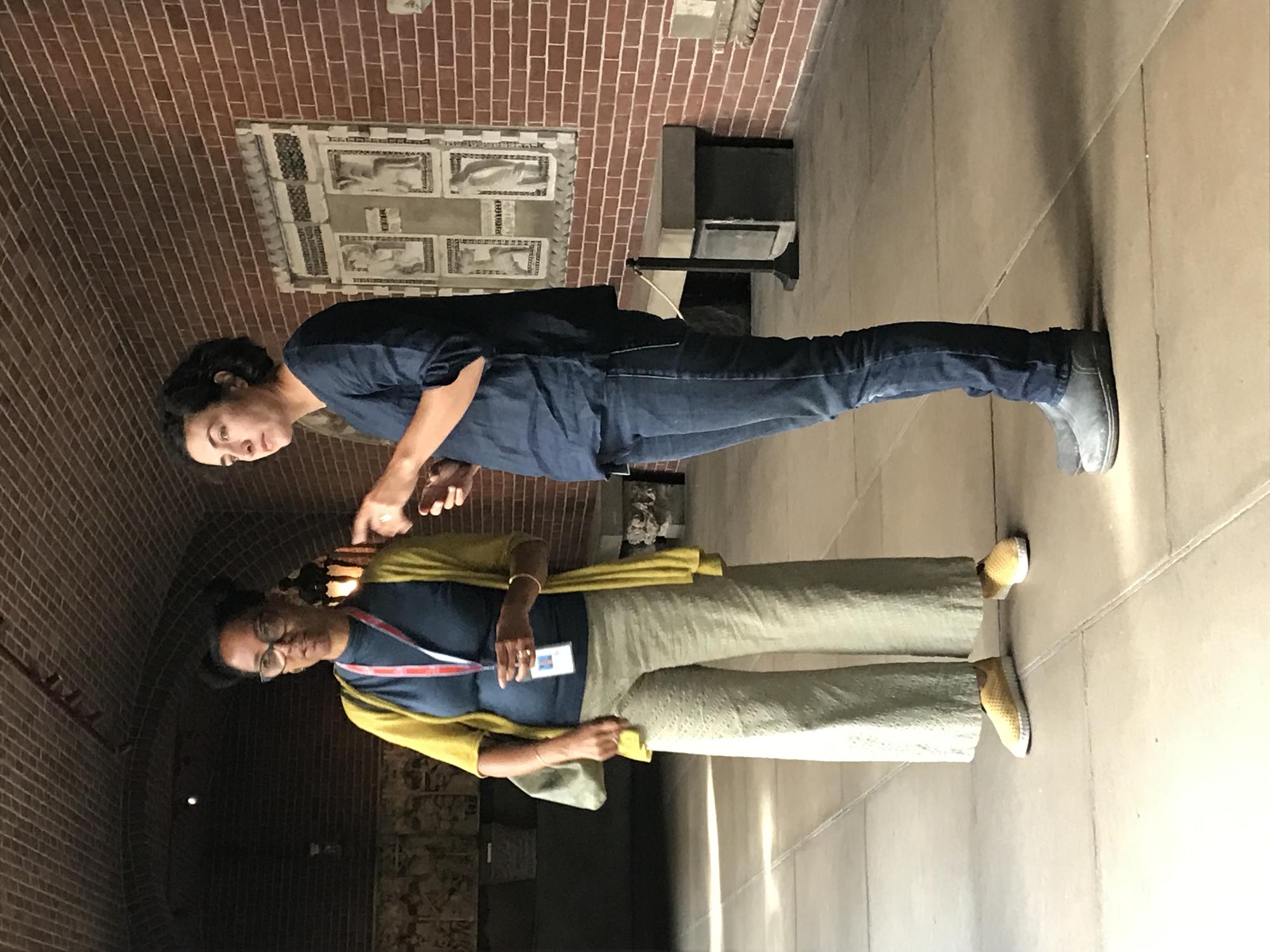 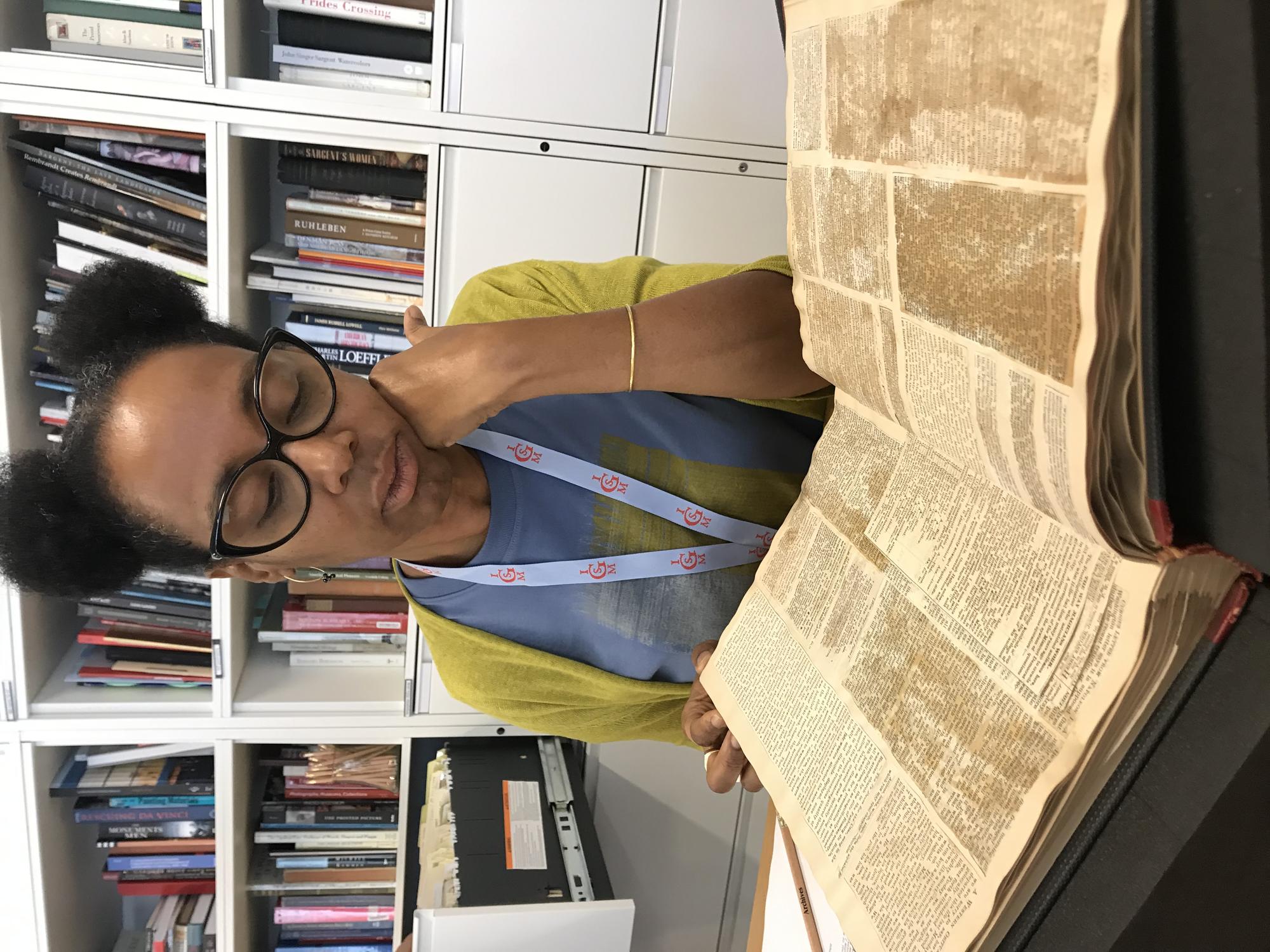 Sonya Clark with looks at materials with archivist, Shana McKenna, 2019

Sonya Clark in the galleries, 2019

Sonya Clark and Erika Rumbley, Horticulturist at the Museum and Prison Horticulture Educator talk about plants in the Courtyard, 2019

In addition to her time in archives and the galleries, Clark spent nearly every day in the Greenhouse Classroom. The space provided the ideal studio for her to create hundreds of imagined constellations using the sun, vegetable seeds, and cyanotype pretreated fabric. Cyanotype is a photographic printing process that uses light to expose and create a cyan-blue and white print, or blueprint as it is often referred to. The seeds were randomly tossed onto the fabric at the artist’s whim but many of the prints featured the celestial gourd, or dipper, which slaves use to guide them on their journey north. The pieces were later sewed together into one large celestial night sky which Clark installed on the ceiling at The Phillips Museum at Franklin and Marshall College in January 2020.

Clark encouraged others to work on the project with her and to talk about their personal histories and experiences including a group of students from the Massachusetts College of Art. She was also invited by the Museum’s Greenhouse Operations Manager, Erica Rumbly, to do a workshop of the project at the Old Colony Correctional Center where Rumbly teaches incarcerated and detained men in the art and science of plants. The experience had a profound impact on Clark. At the suggestion of one of Rumley's students, the image of a black hole was introduced into the cyanotype sky 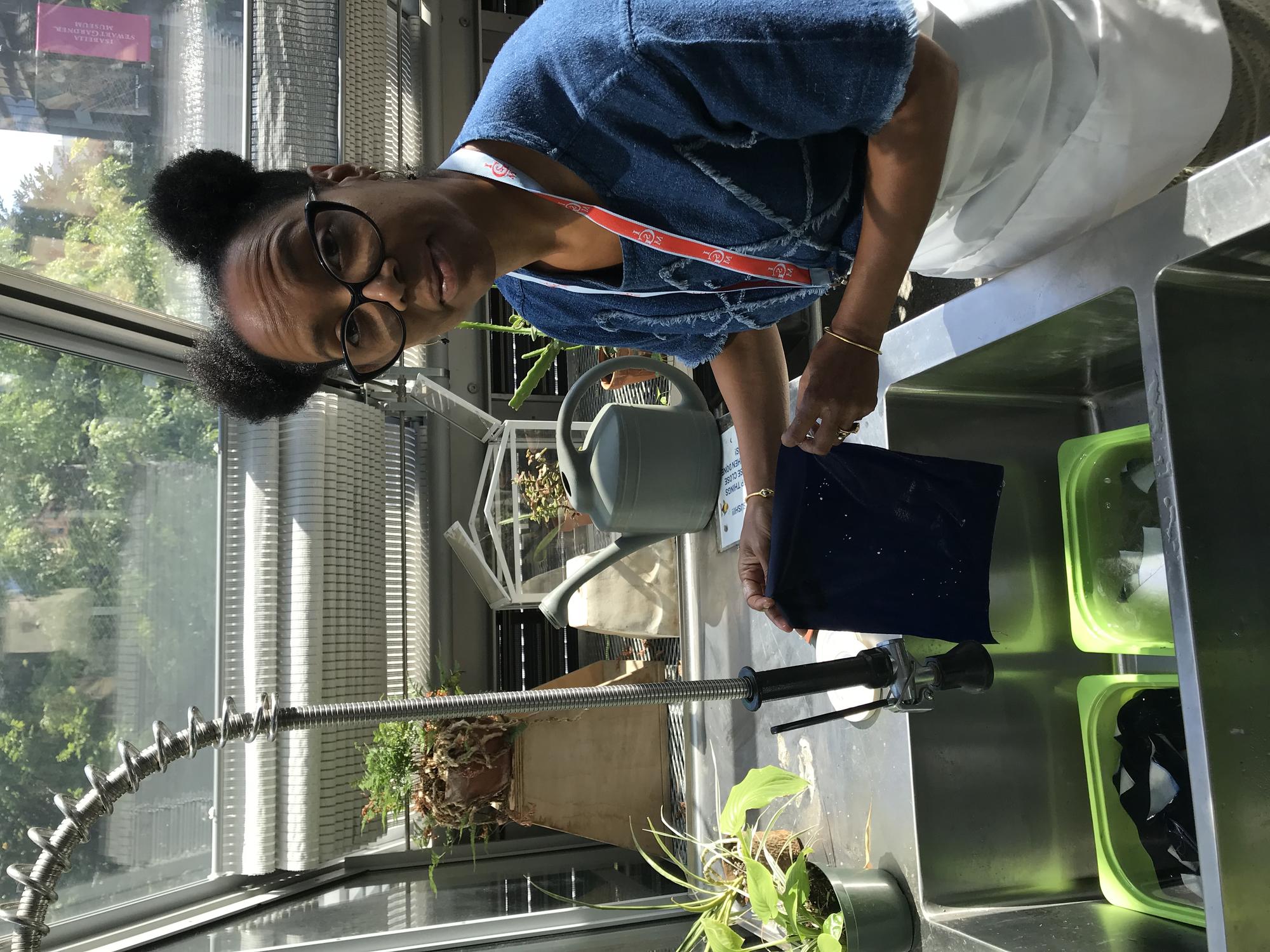 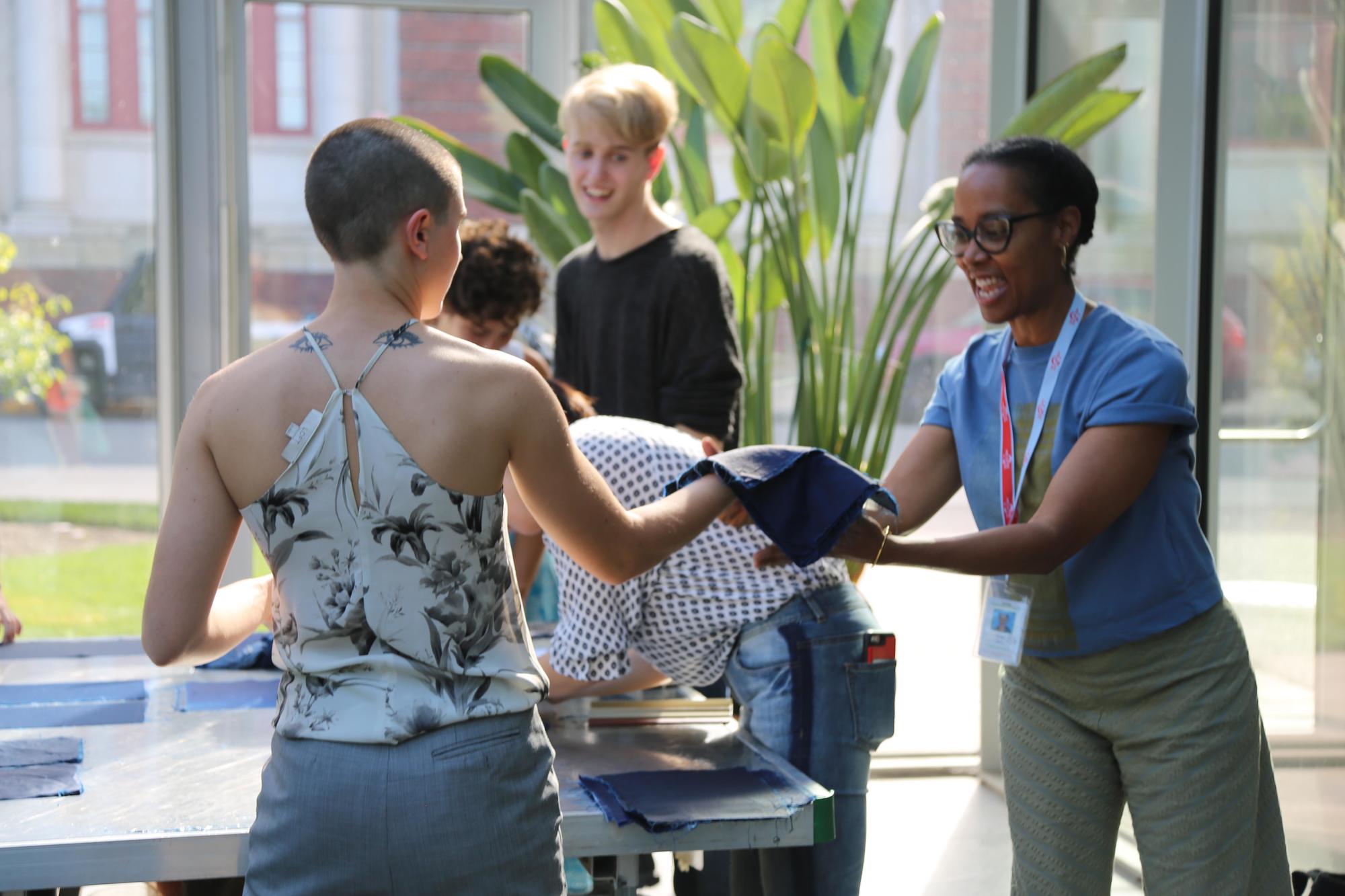 Clark’s time at the Gardner also corresponded with an exhibition and parade in Boston created by her mentor and friend, Nick Cave. The coincidence allowed her to join Augment, an exuberant social experience and call for the city to come together and cultivate joy. Cave invited artists, dancers, performers, and the public to participate in a three-mile procession from the Boston Center for the Arts in the South End to Upham’s Corner, bringing his inflatable sculptures from the location of their initial installation to their final destination at the Design Studio for Social Intervention.

My stories, your stories, our stories are held in the object…the everyday ‘thing’ becomes a lens through which we may better see one another.

Sonya Clark (b. 1967 USA) is Professor of Art at Amherst College in Amherst, Massachusetts. Previously, she was a Distinguished Research Fellow in the School of the Arts at Virginia Commonwealth University where from 2006 until 2017 she served as chair for the Craft/ Material Studies Department. In 2016, she was awarded a university-wide VCU Distinguished Scholars Award. She earned an MFA from Cranbrook Academy of Art and was honored with their Distinguished Alumni Award in 2011. She has a BFA from the School of the Art Institute of Chicago. Her first college degree is a BA from Amherst College where she also received an honorary doctorate in 2015.

Clark’s work has been exhibited in over 350 museums and galleries in the Americas, Africa, Asia, Europe and Australia. She is the recipient of a United States Artist Fellowship, a Pollock Krasner award, an 1858 Prize, Art Prize Grand Jurors Award, and an Anonymous Was a Woman Award, a Red Gate Residency in China, a BAU Carmago Residency in France, a Rockefeller Foundation Bellagio Residency in Italy, a Smithsonian Artist Research Fellowship, a Knight Foundation Residency at the McColl in North Carolina, the Civitella Ranieri Residency in Italy, a Yaddo Residency in New York, and a VCUarts Affiliate Fellowship at the American Academy in Rome. She was an inaugural recipient of the Black Rock Senegal Residency Fellowship which opened in May 2019. Recent awards include deCordova Museum’s 2020 Rappaport Prize, and a 2020 College Fellow Award from the American Craft Council. 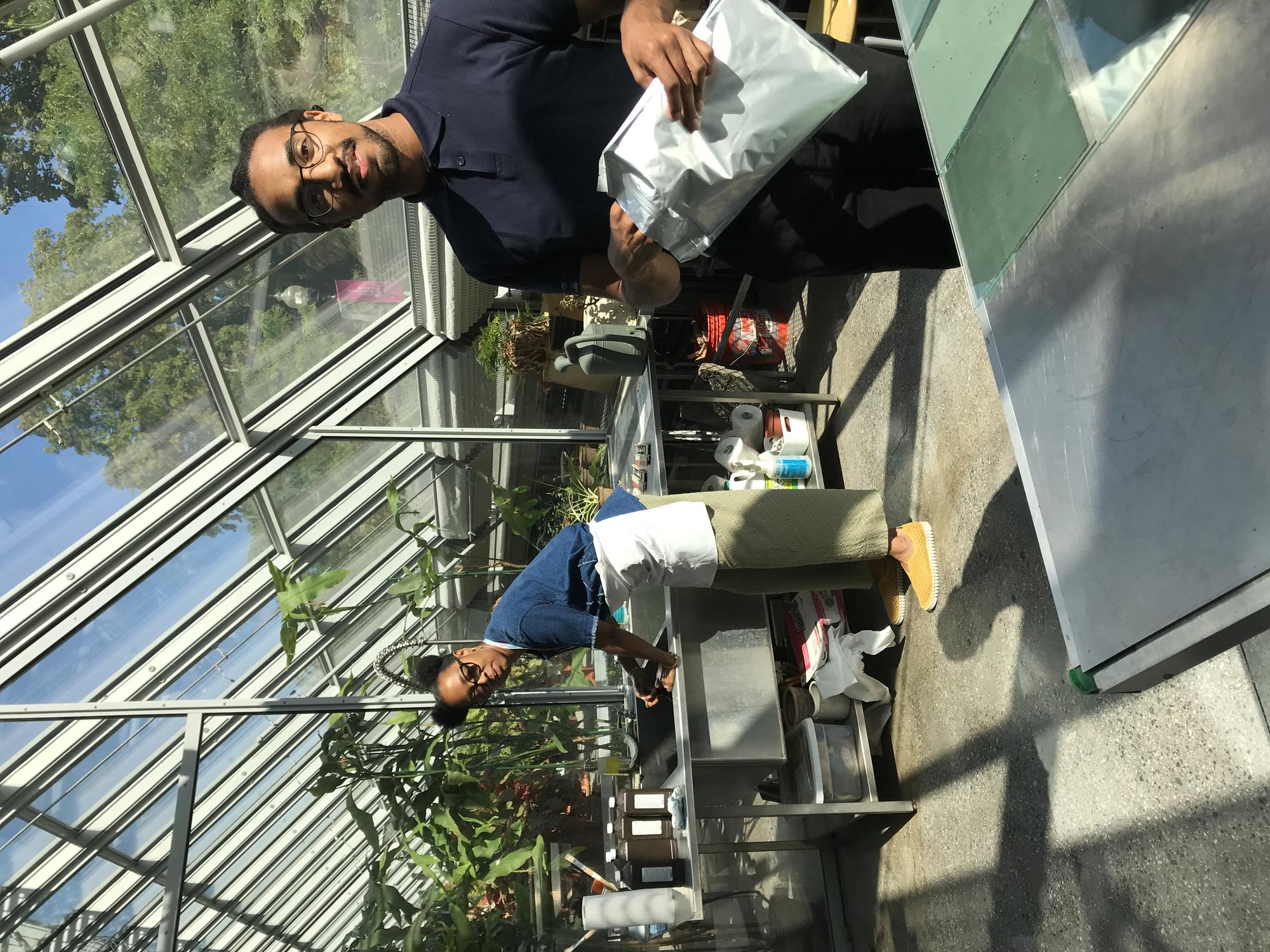 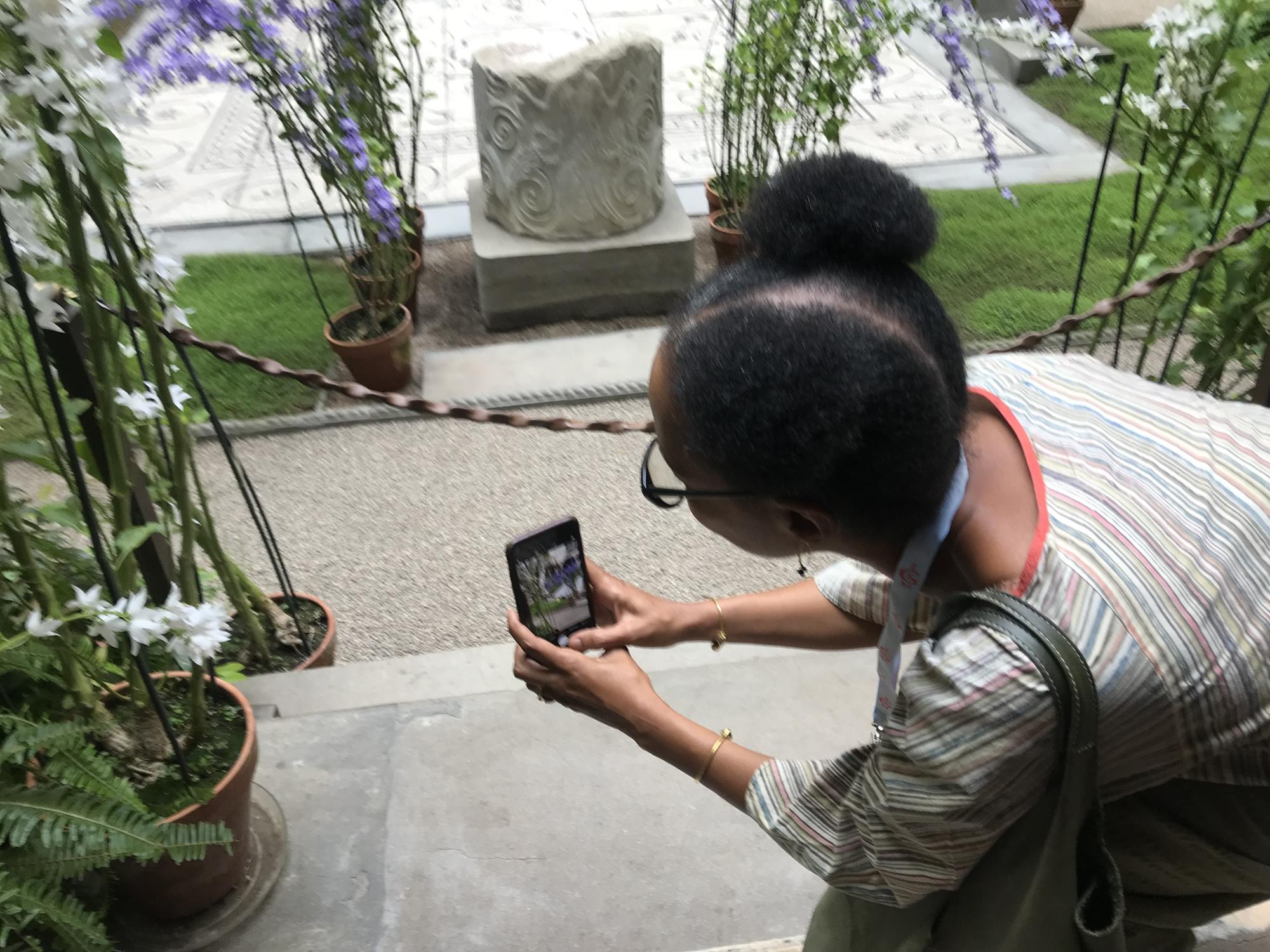 Sony Clark working on cyanotype project in the Education Greenhouse with Jonathan Jackson, 2019

Sonya Clark in the galleries, 2019