The Secrets Revealed by the Long Gallery Stools’ Conservation

Our conservators made exciting discoveries when they took on the task of analyzing and restoring a pair of stools in the Long Gallery. Read on to learn more.

In the Long Gallery of the museum are two diminutive 19th-century Italian stools, or sgabelli, tucked under display cases. It’s possible that Isabella placed these stools there because the silvery, shiny upholstery complemented and reflected the vibrant Bardini Blue-painted walls. From 2016-2018, conservation technicians worked hard to conserve and analyze these stools to learn more about their composition and origin. Here’s what they learned.

The History of the Stools

While these stools are 19th-century objects, the sgabello form originated in Renaissance Italy. Small and easily transportable, their size and convenience became a popular form and spread to other European countries. There are examples of sgabelli in period paintings, which show how the stools functioned in Renaissance European interiors. 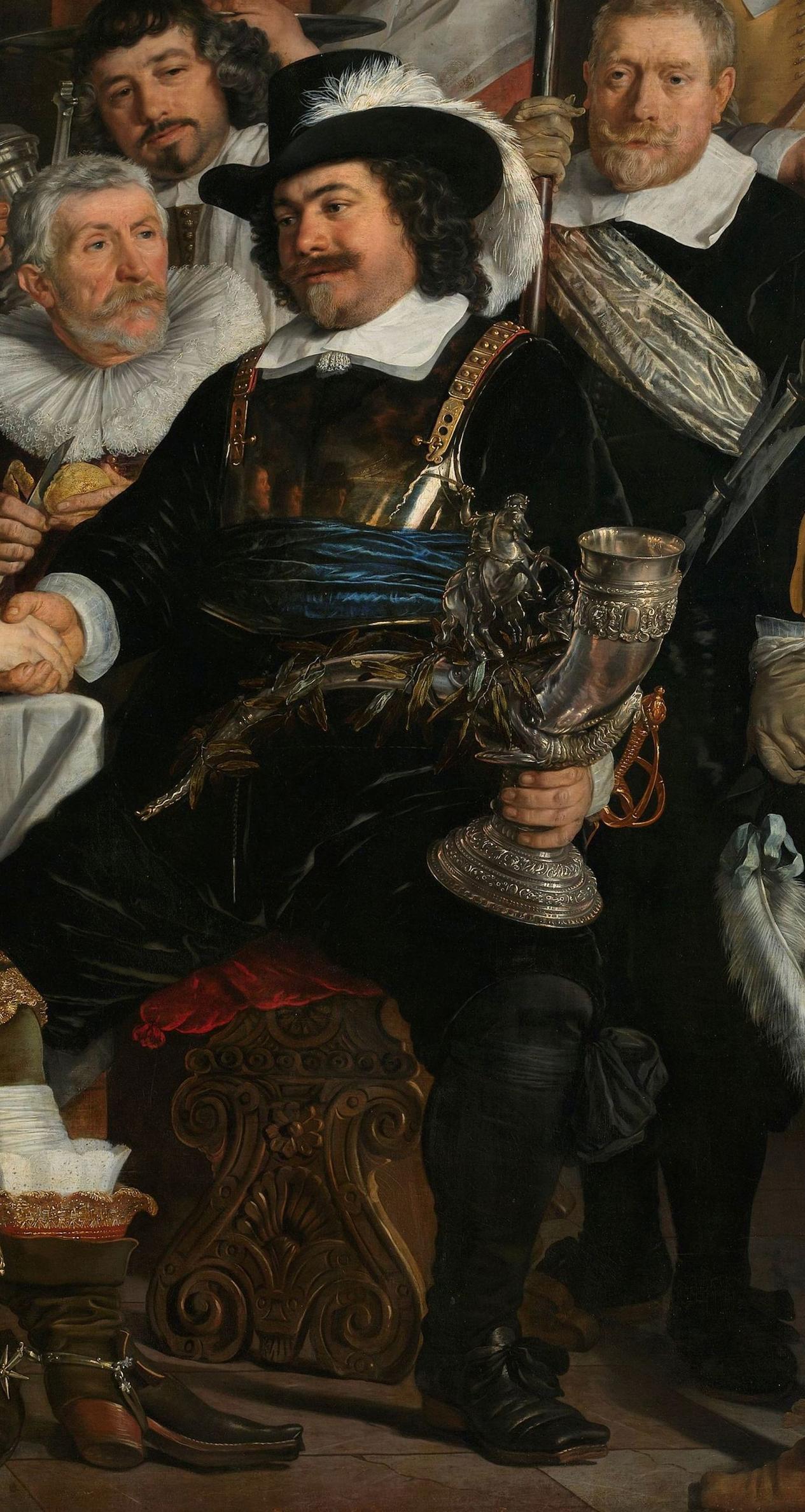 Bartholomeus van der Helst (Dutch,1613– 1670), Banquet at the Crossbowmen’s Guild in Celebration of the Treaty of Münster, 1648. The man second from right in the fore is perched atop a stool closely related to the Gardner’s stools.

Bartholomeus van der Helst (Dutch,1613– 1670), Banquet at the Crossbowmen’s Guild in Celebration of the Treaty of Münster, 1648. Detail of the man sitting on a stool closely related to the Gardner’s stools.
Collection Rijksmuseum, SK-C-2 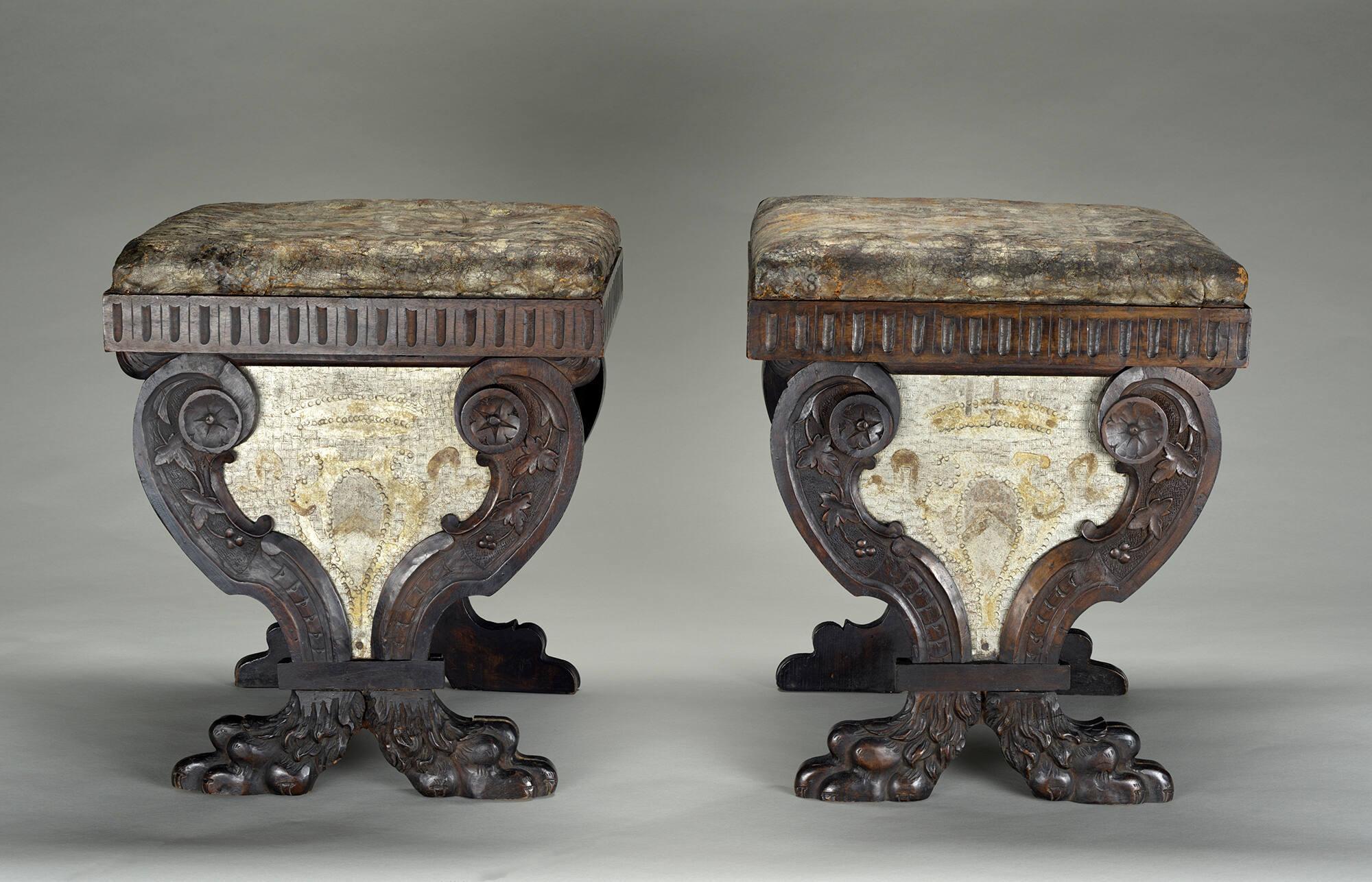 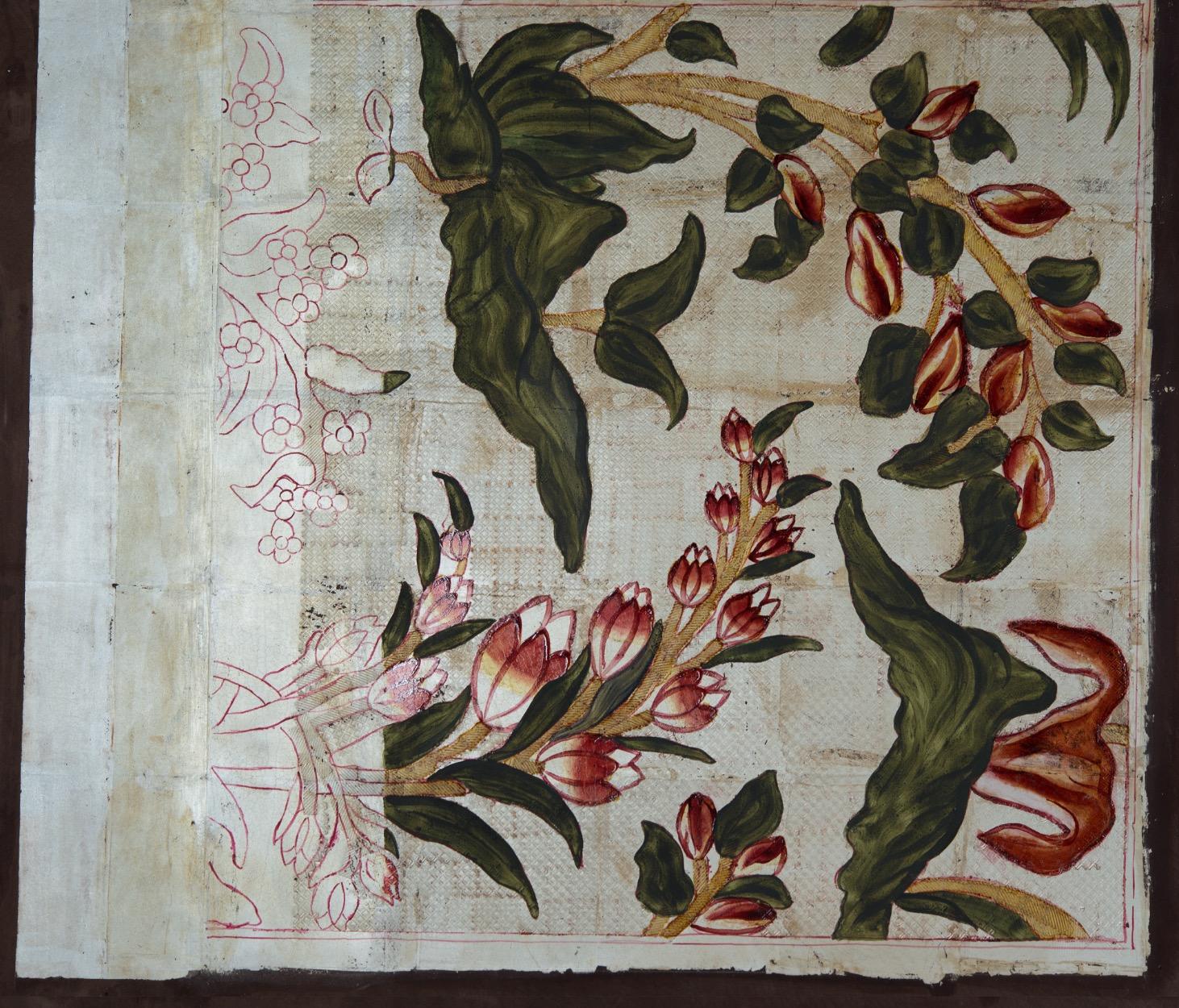 Gilt leather is a centuries-old craft of applying silver leaf to leather, using a mordant size or glue. The silver usually has decorations of punchwork and varnishes with colored glazes. Yellow glazes are the most common because the resulting metal surface will look like gold, or the silver may be painted for a polychrome effect. There are other beautiful examples in the Veronese Room, where gilt leather panels adorn the walls and upholster the armchairs flanking the fireplace.

After analysis, the stools revealed that they were not made of 17th-century gilt leather, as previously thought. In fact, they were not made with any of the traditional methods and materials, but something entirely different. These stools are not gilt with silver leaf but with tin leaf, and the inset side panels aren’t leather at all, but gilded paper boards! The Long Gallery stools are ‘imitation’ or ‘faux’ gilt leather.

Analysis began with portable x-ray fluorescence spectroscopy (pXRF). It’s a non-destructive elemental analysis that excites electrons on a surface using x-rays, allowing conservators to understand the elemental make-up of materials. In this case, pXRF gave a startling result. Instead of silver, the analysis found tin and zinc. This showed that the metal leaf was tin leaf, and not silver. The zinc remained a mystery until microscopy.

In cross sectional microscopy, conservators take small samples and embed them in a hard resin. They polish them down to reveal a cross-section which they can view under a microscope. First, they found that the side panels were laminated paperboard, and not leather as previously thought.

Microscopy allowed conservators to see the layers of surface decoration, from the thin metal leaf down to the substrate, and the mordant size used to adhere the metal leaf. In ultraviolet (UV) light, the mordant appeared to glitter, which zinc does in UV light. This indicated that zinc was a drier in the gilding process. It was a common additive starting in the 19th century to speed up the cure time of slow-drying oils.

The last task was to identify the leather itself. This could help conservators understand the provenance of the stools: Italian gilt leather generally came from goat or sheepskin, whereas calfskin was more common in Northern Europe 1. Conservation scientists used a mass spectrometer to perform protein analysis. This process can identify species- or genus-specific characteristics of collagen-based animal products, such as leather. After a multi-day process, results came back as sheepskin! This helped support the theory that these were indeed Italian-made stools.

With all the puzzle pieces in place, conservators made a mock-up of the upholstery. They started with sheepskin, tin leaf, and stamp punches using small pieces of metal embedded in epoxy. They concocted a varnish of amber and copal resins, boiled with linseed oil for hours to achieve a golden color, following the traditional process. Imagine how visually striking these stools would have once been, dotted with an elaborate pattern of golden shapes dancing across silver-like metal. 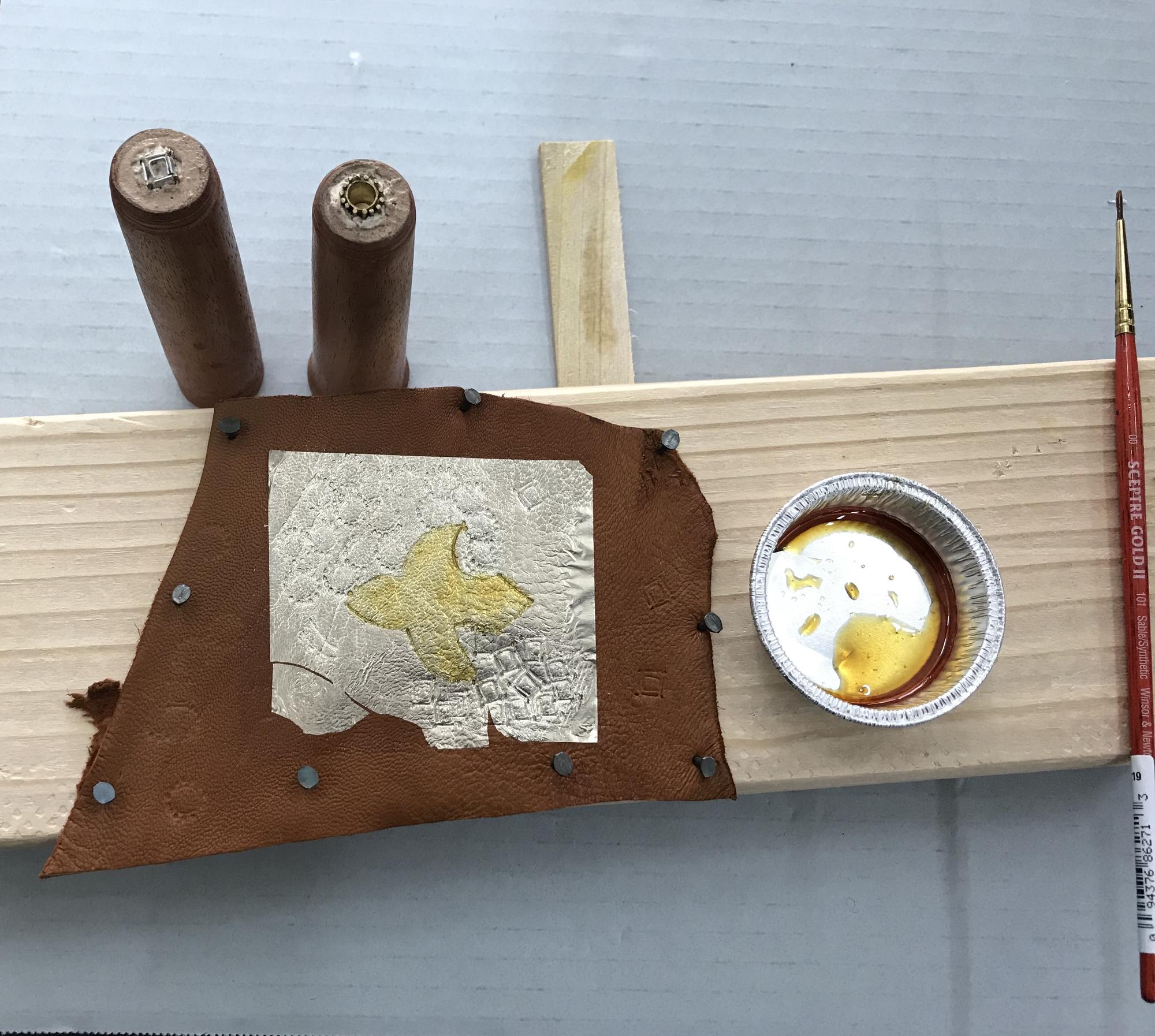 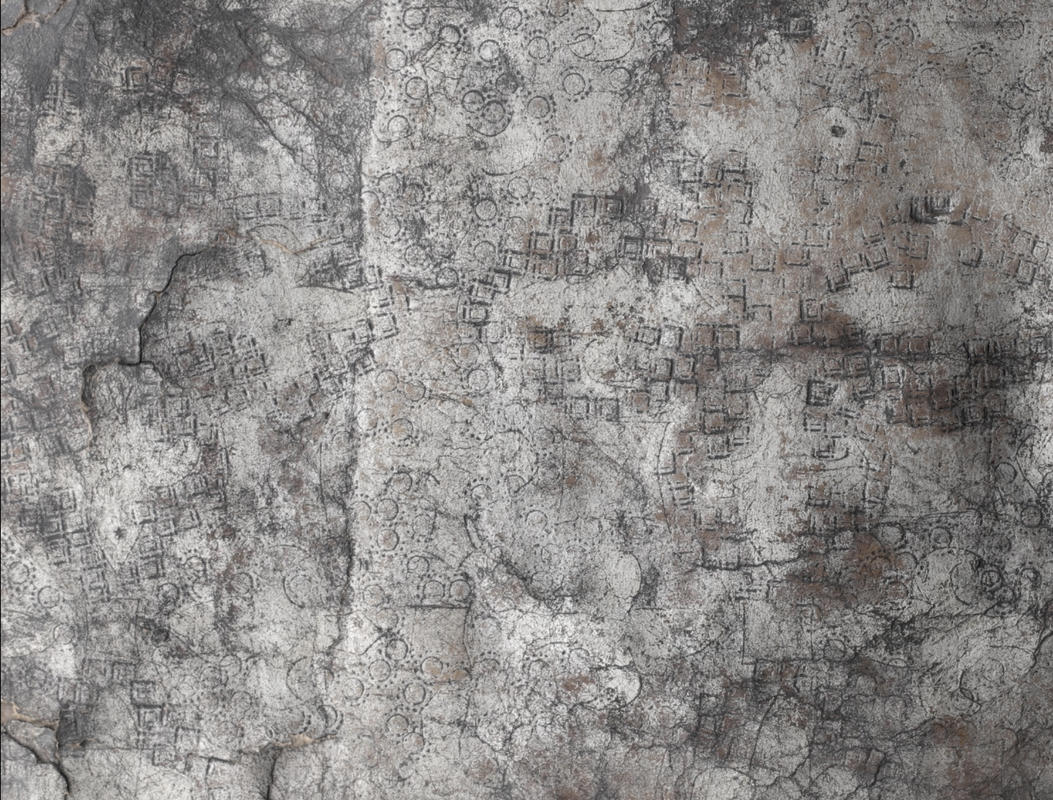 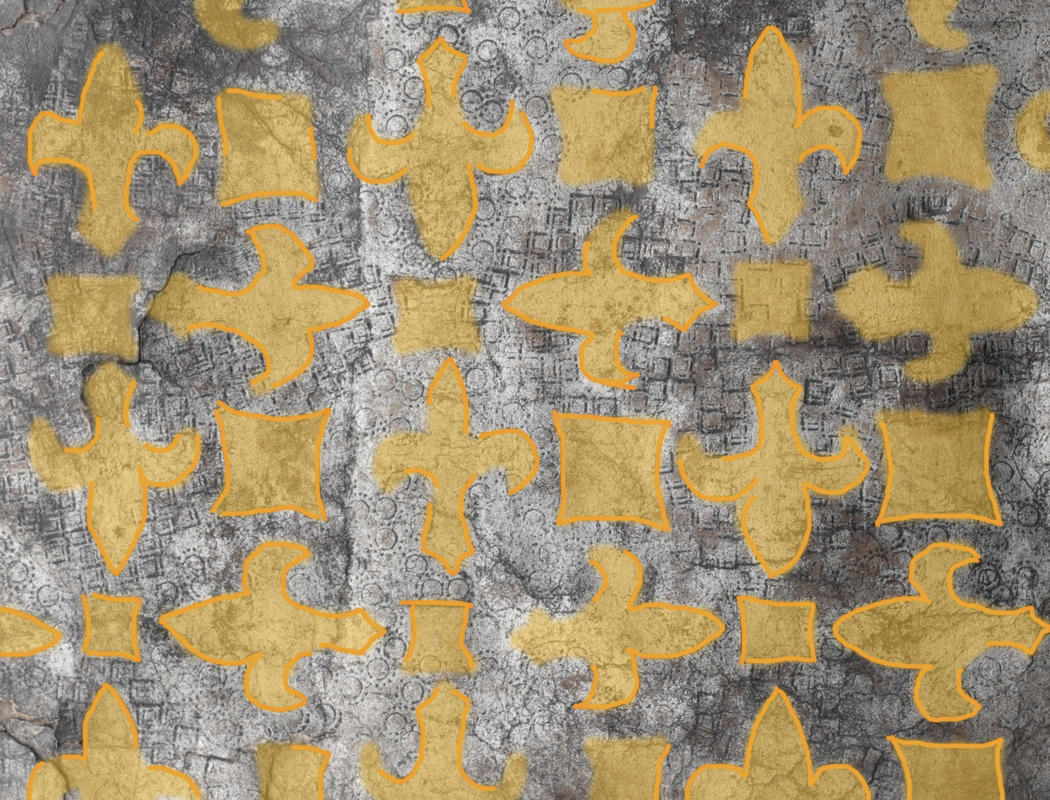 Mock-up of the upholstery cover leather using all the same materials, from sheepskin and tin leaf to an oil-resin varnish and reproduction stamps for punchwork.
Isabella Stewart Gardner Museum, Boston

Highlighting the fleurs-de-lis pattern on the stool tops. If the shapes look a little irregular, that’s because they are: the varnished shapes were all incised by hand, rather than stamped with a ready-made tool.
Isabella Stewart Gardner Museum, Boston

The fleurs-de-lis pattern on the stool tops showing the gold color. If the shapes look a little irregular, that’s because they are: the varnished shapes were all incised by hand, rather than stamped with a ready-made tool.
Isabella Stewart Gardner Museum, Boston

The stools were in fairly good condition, on the whole, but the leather was embrittled, powdery to the touch. They had many tears, small losses, and were flaking. The leather tops had brown net covers, similar to hair nets. The caps had successfully protected the leather from further damage but were obscuring the decoration and trapping dirt and dust. Conservators needed to find another solution.

The first step was consolidation. Conservators added a cellulose-based material to the leather where it was powdery to give it strength and hopefully prevent further loss. Next, they bridged tears using splints made of goldbeater’s skin. This material is chemically similar to leather, and had the strength and flexibility needed to work the tiny splints underneath the tears. 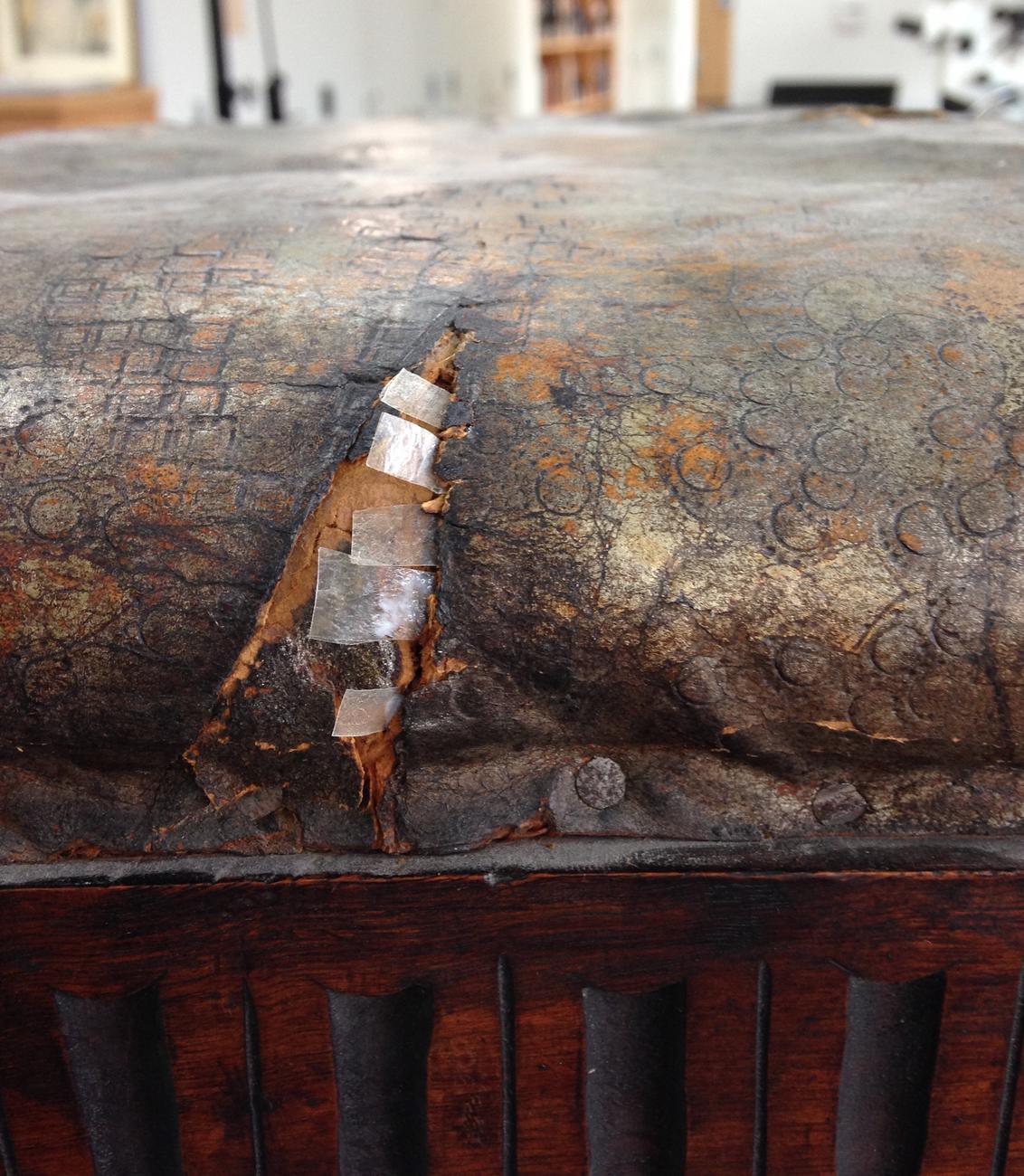 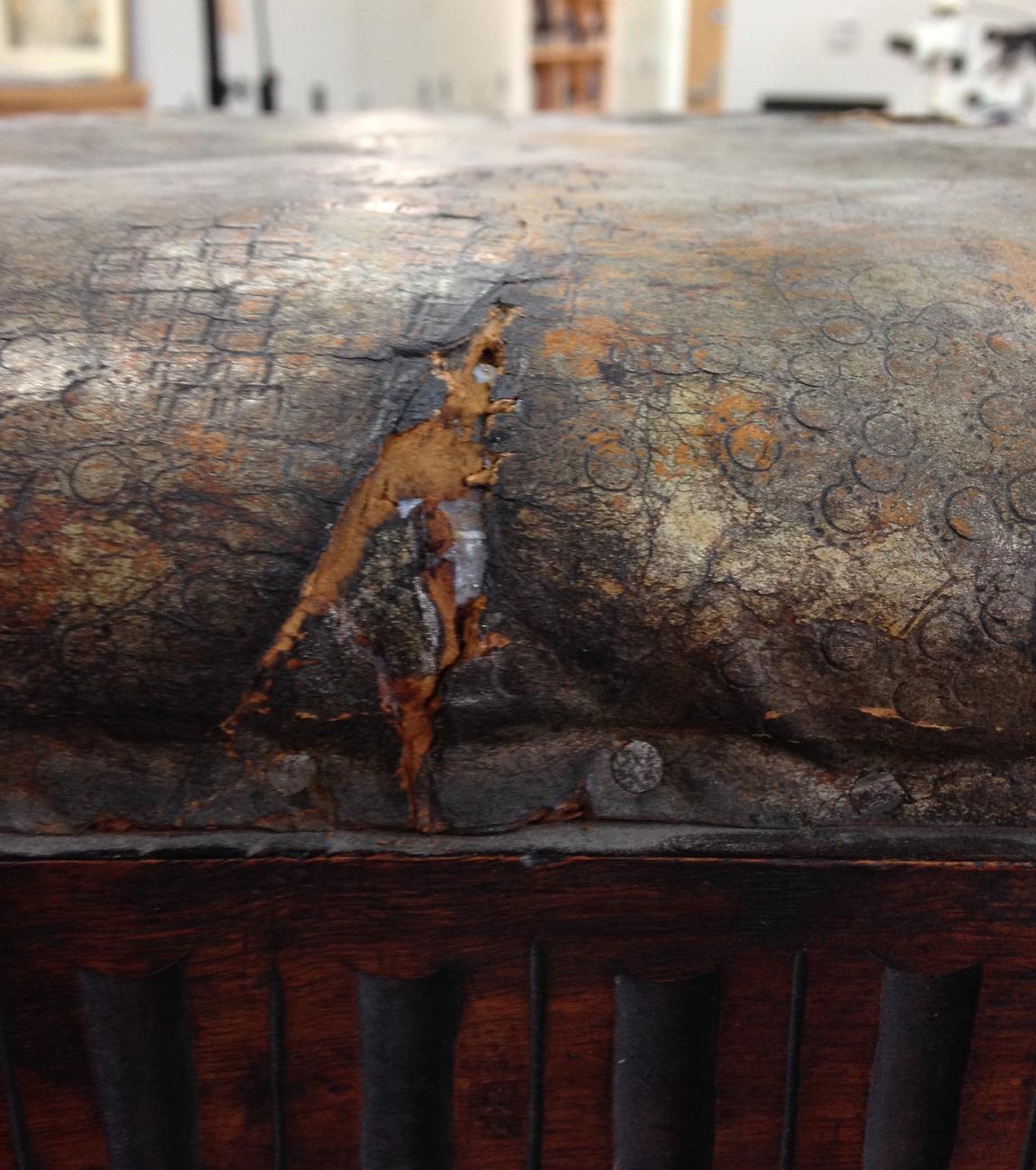 For small losses in the leather, conservators bridged the loss with fine Japanese kozo tissues, then painted them with mica powder-infused acrylic paints. This gave them just a hint of the shimmery tin reflectance. 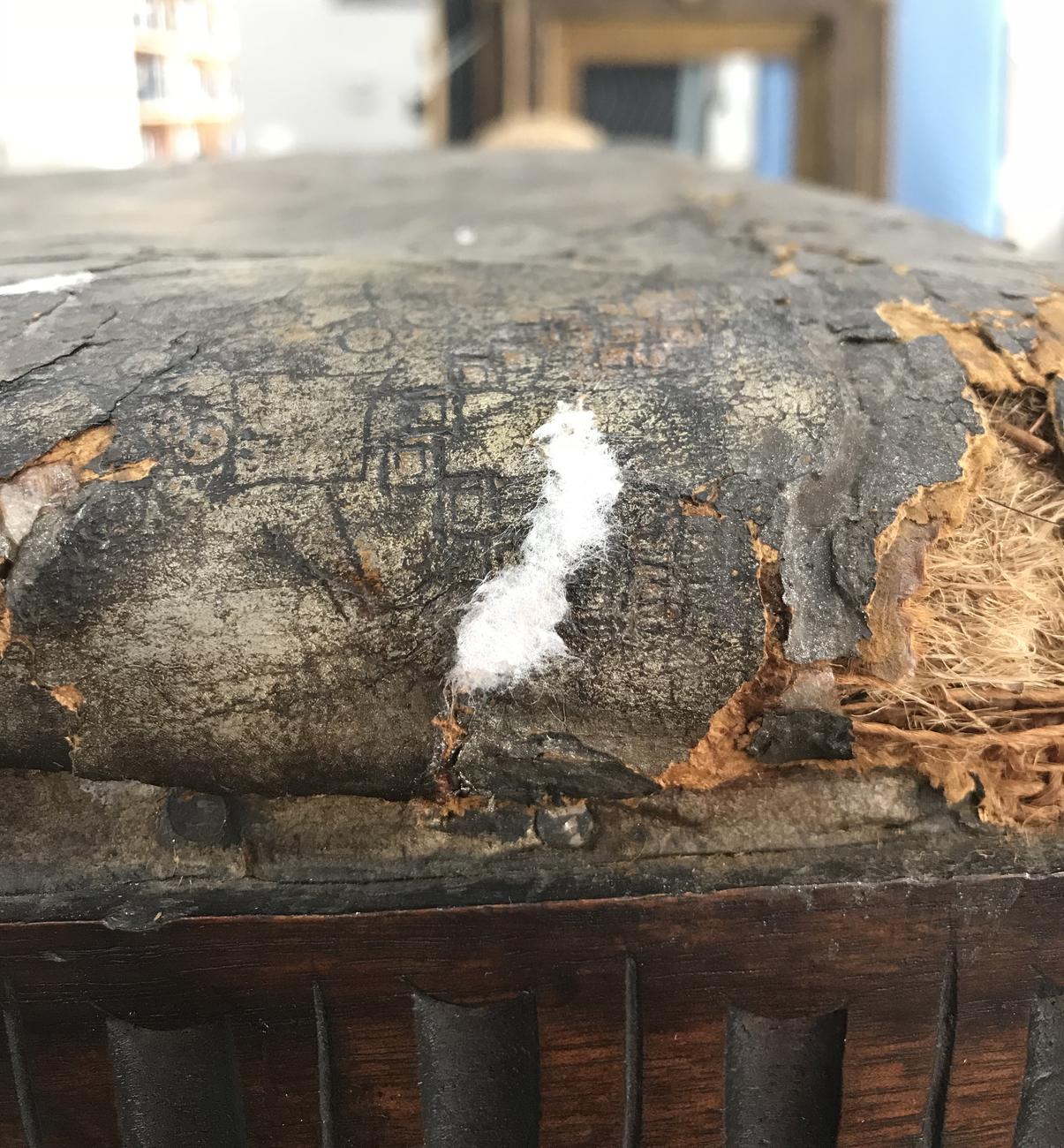 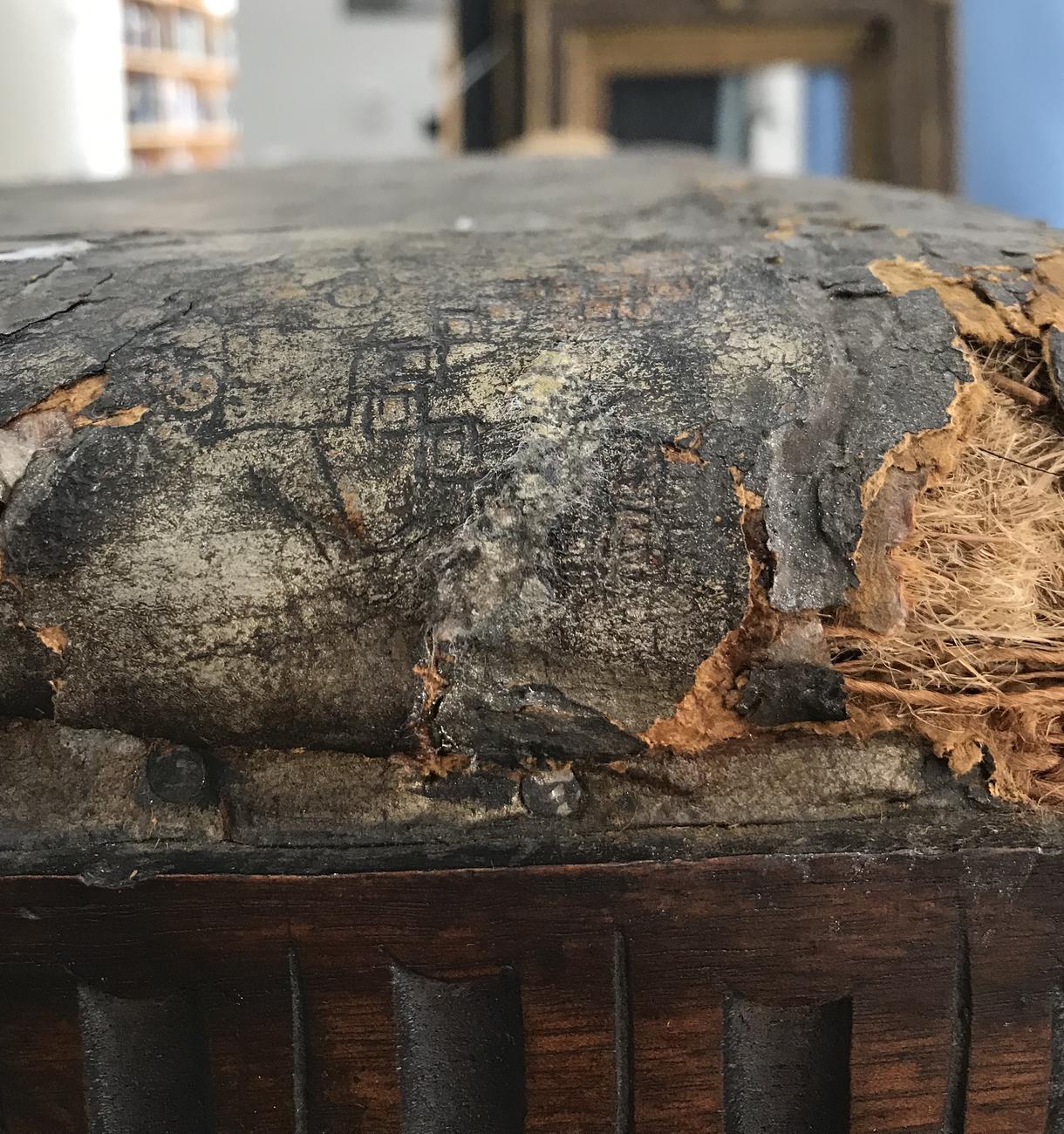 Larger losses were more challenging, as they needed to be visually convincing. The conservators used a synthetic, thermoplastic material which could reactivate with a heated spatula to adhere it in position. They added texture to it like leather, and stamped it to match the existing decorative punchwork. Finally, they applied metal leaf and glazes to color the areas to match. 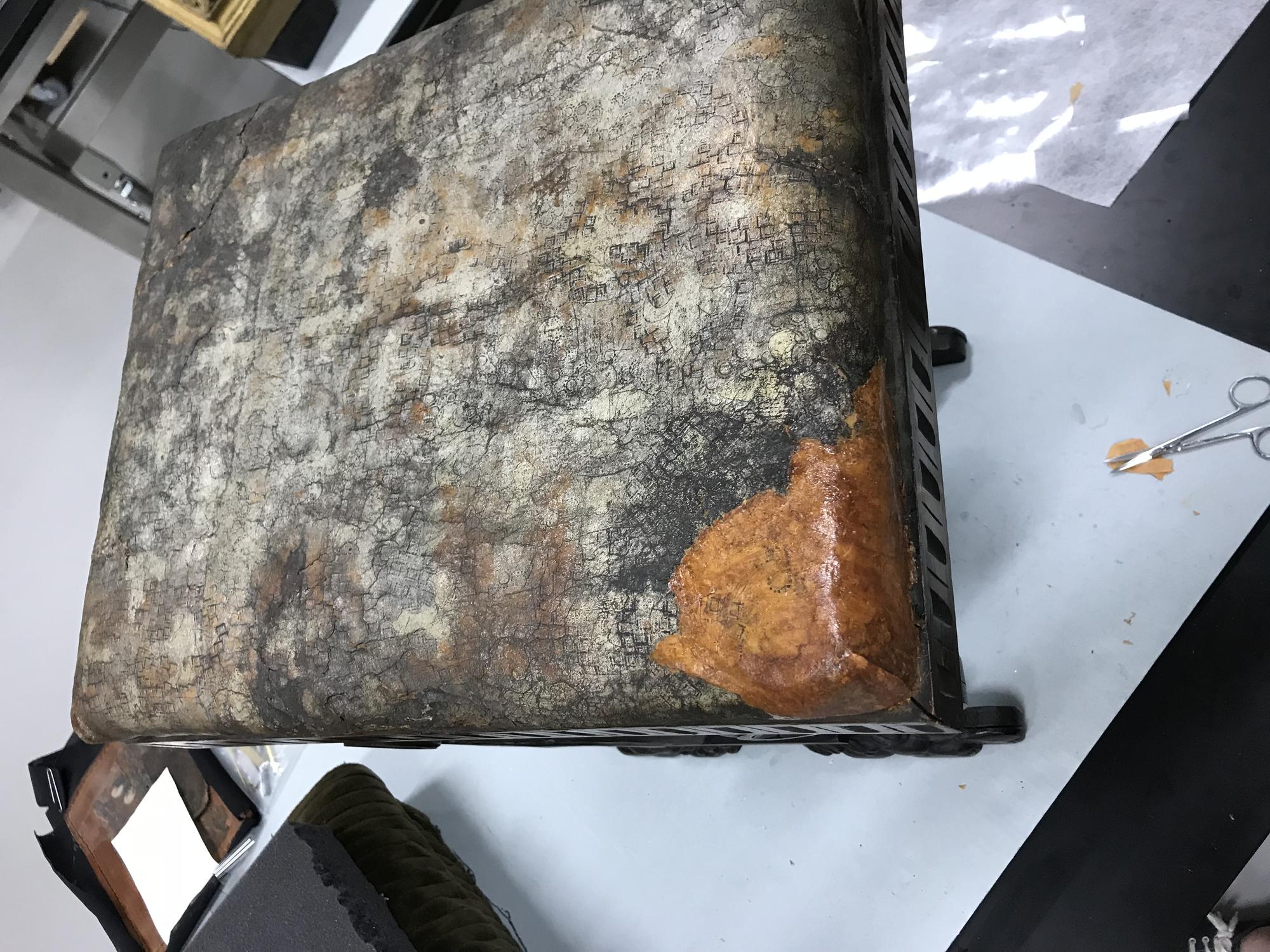 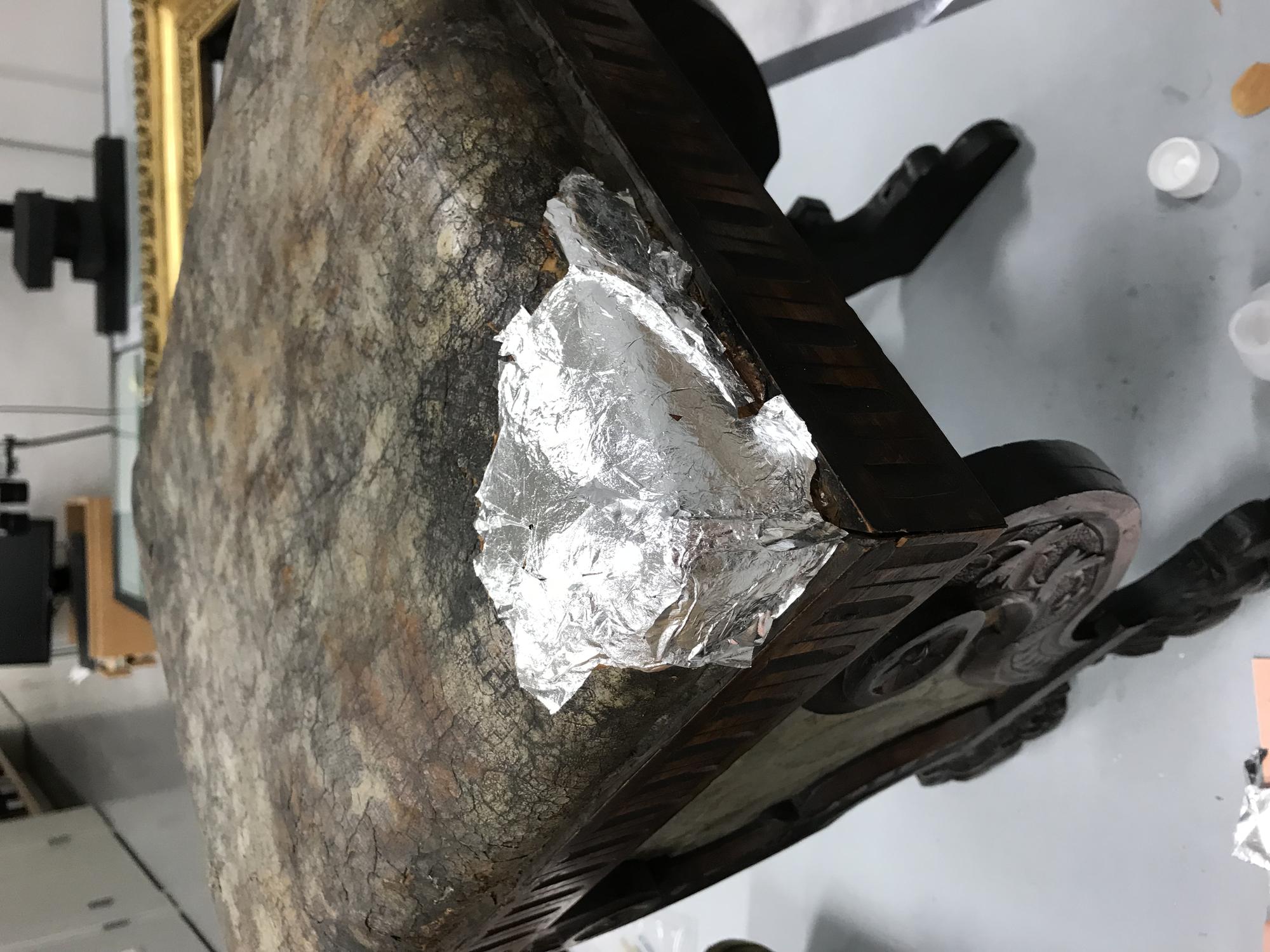 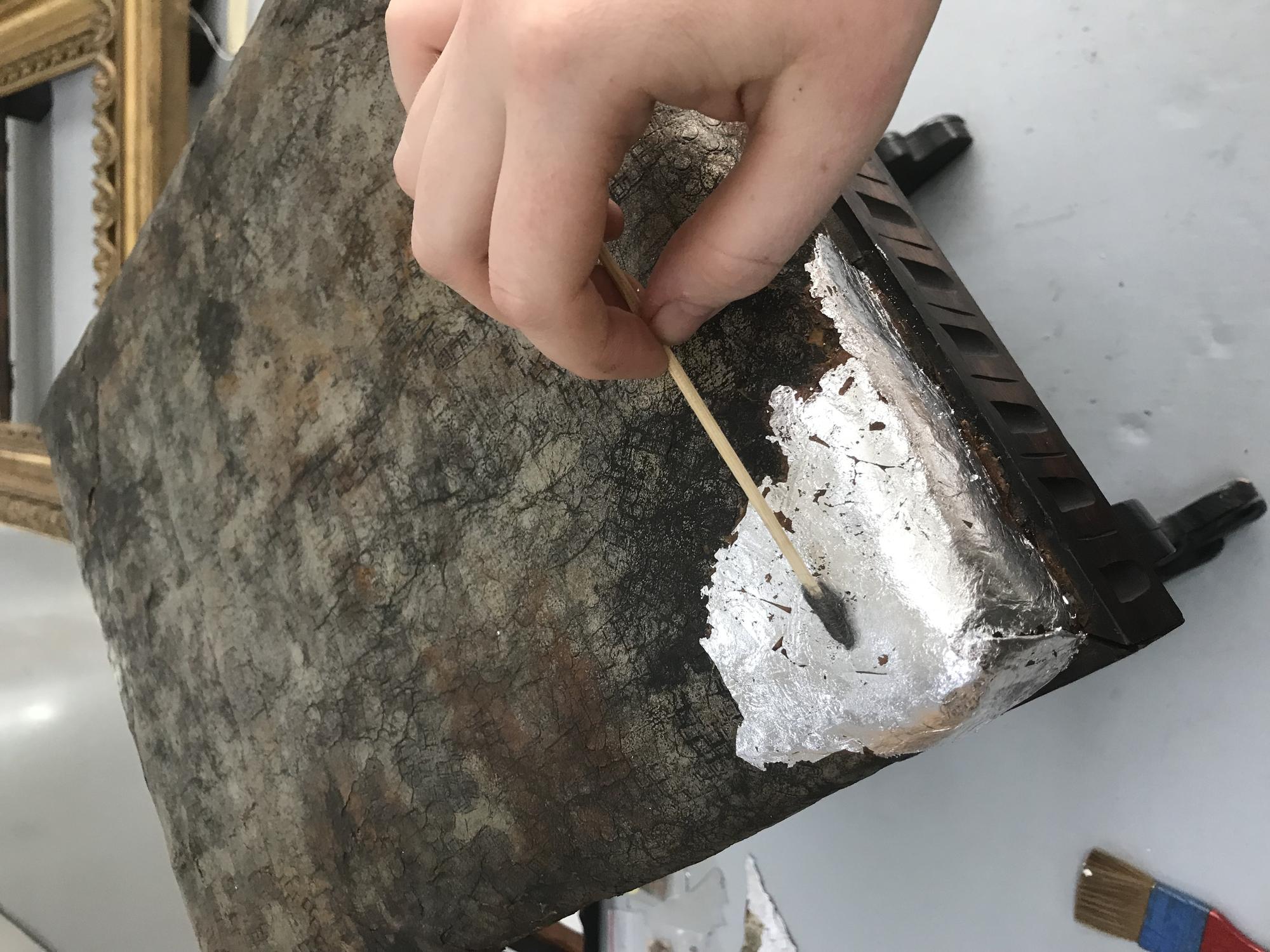 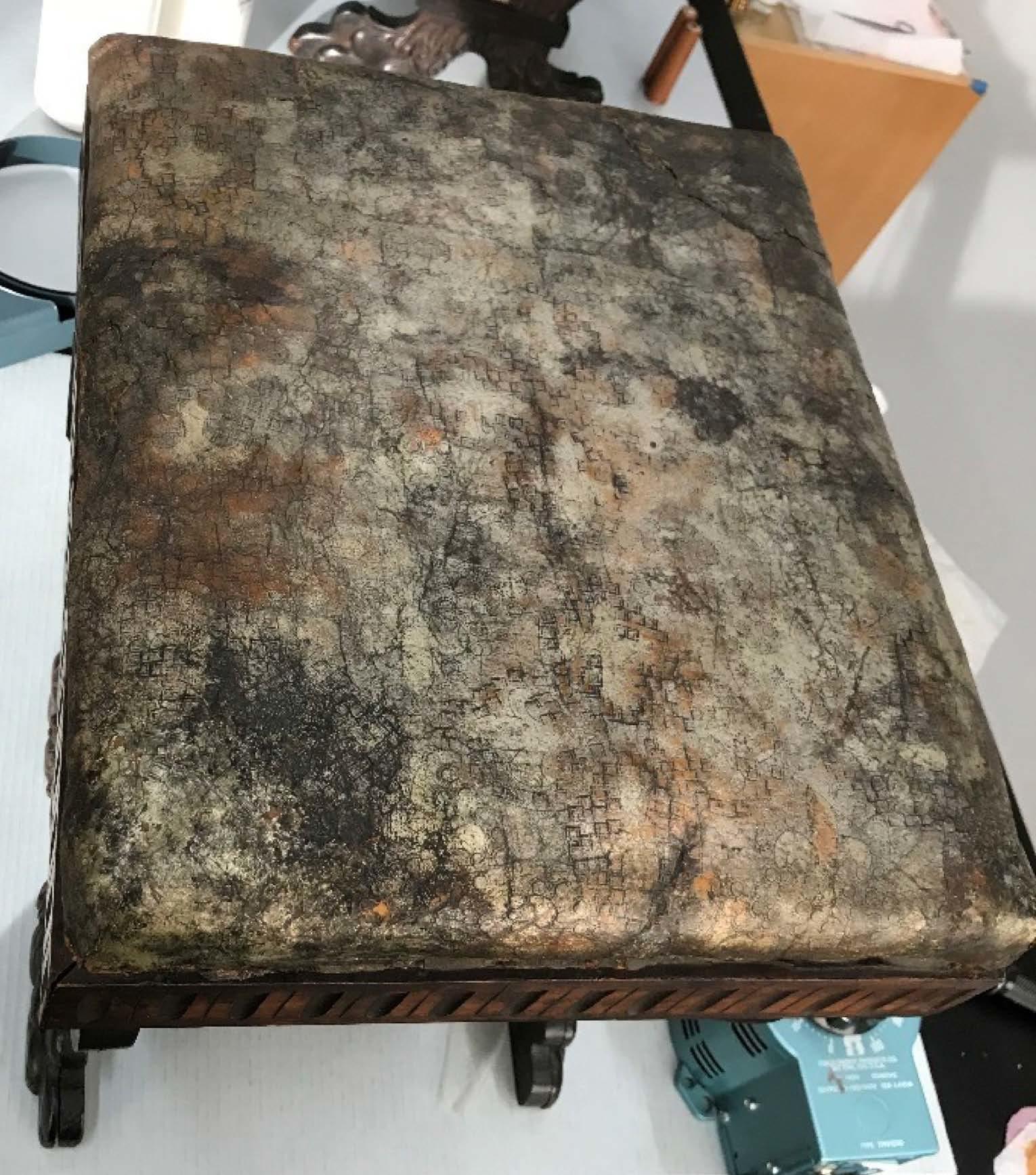 At the end of treatment, both stools were more like the glittering jewels that Isabella Stewart Gardner envisioned for her Long Gallery. Come find them next time you join us at the Museum! 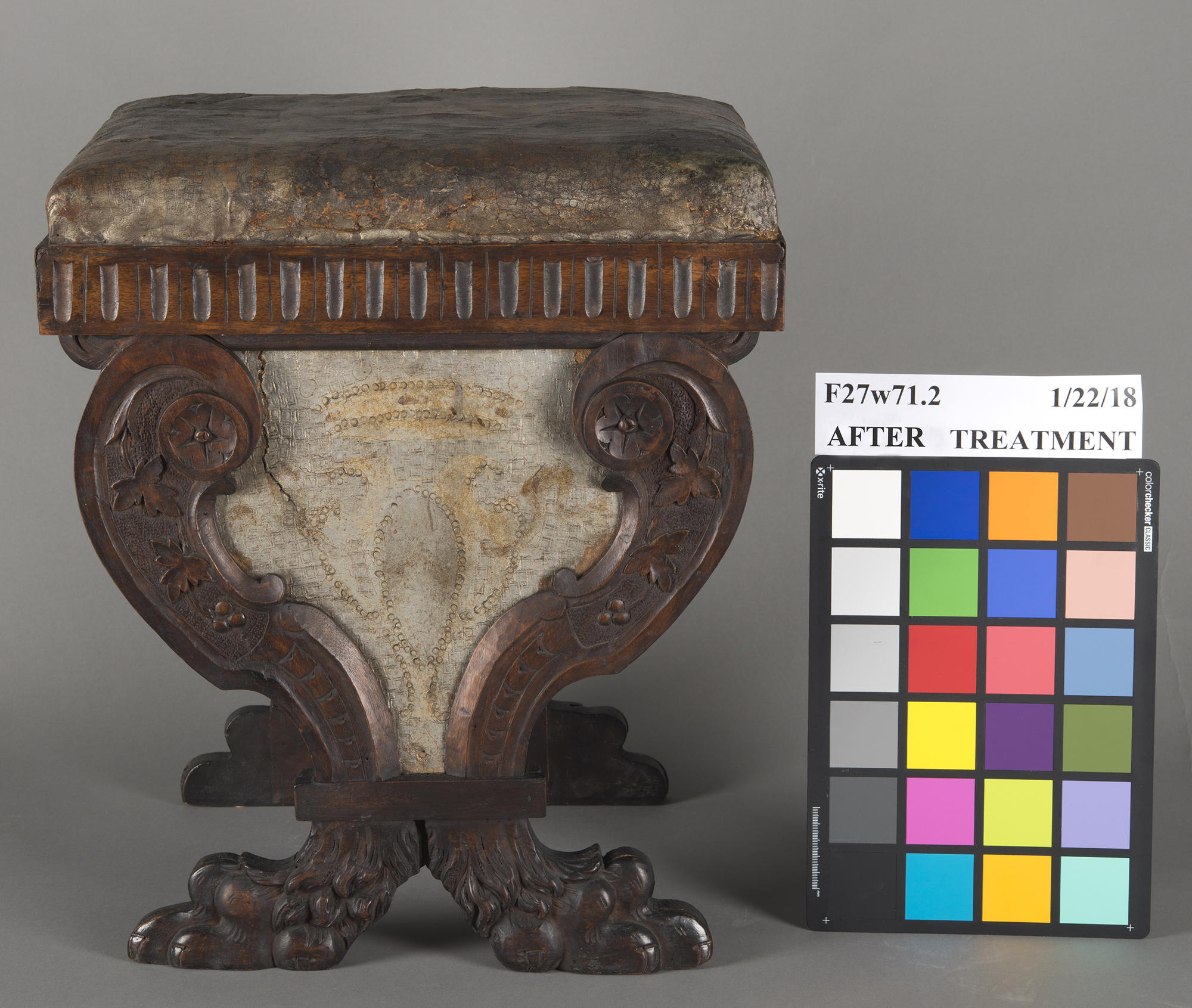 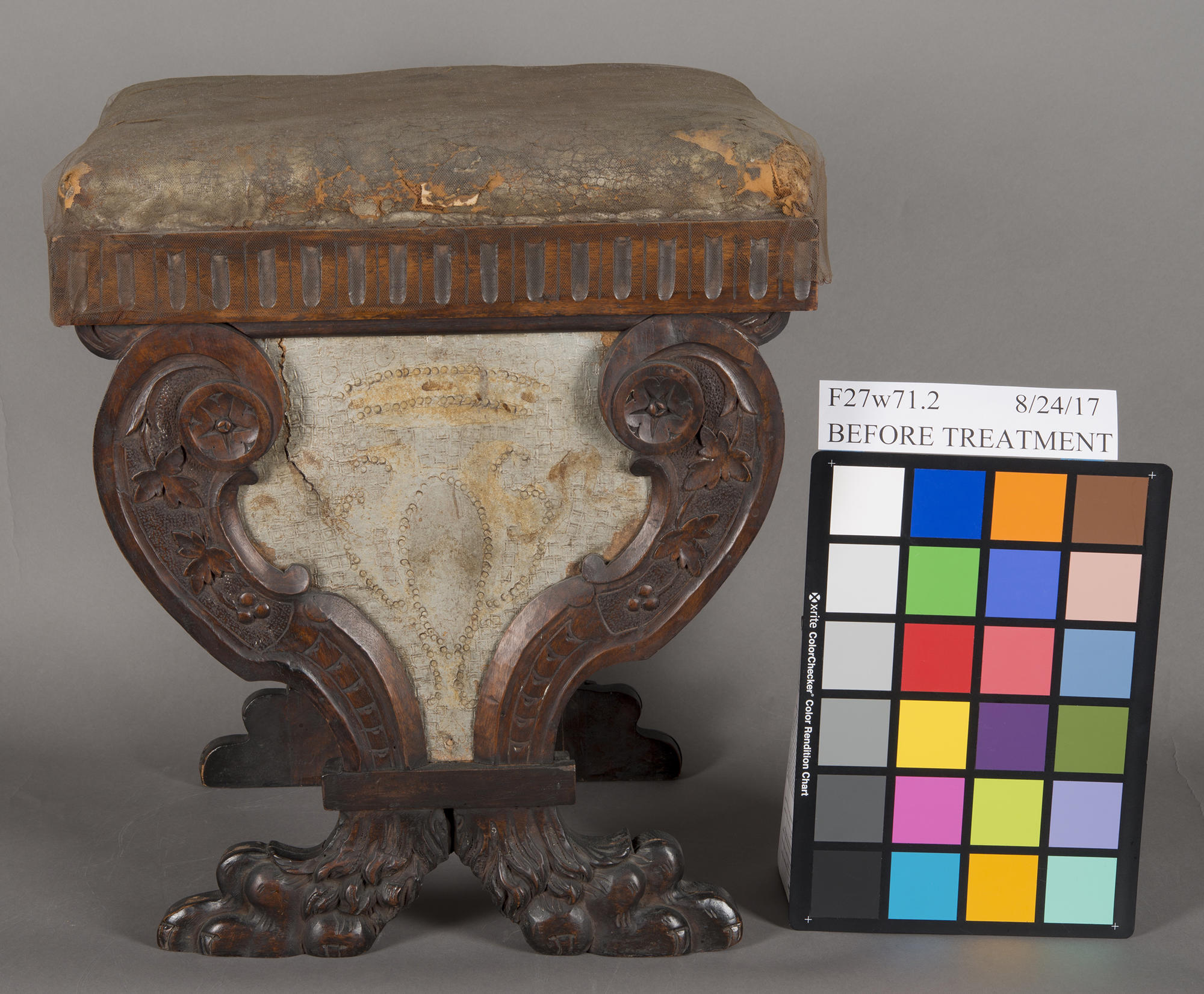 One of the stools, F27w71.2, after conservation
Isabella Stewart Gardner Museum, Boston

One of the stools, F27w71.2, before conservation
Isabella Stewart Gardner Museum, Boston