Relics of an Emperor: Napoleon Bonaparte in the Gardner Museum

Isabella’s fascination with Napoleonic relics is well-documented throughout the Gardner Museum, particularly in the Short Gallery. Learn more about the artifacts in the collection before your next trip to the Museum.

written by Kathleen King, Associate Registrar for the Collection
5 minute read
share this:

Few historical figures have garnered more controversy than Napoleon Bonaparte of France. His reputation since his death in 1821 has experienced extreme highs and lows. Throughout this reputational roller coaster, his cult of personality has inspired collectors to amass souvenirs of his life and career. Isabella Stewart Gardner was one such collector. While attending finishing school in Paris during the 1850s, Isabella was captivated by French literature, culture, and history. She became a true Francophile. In recognition of Napoleon's birthday on August 15th, we take time to examine her affinity for the former emperor.

When building her museum, Isabella devoted an area along the south wall of the Short Gallery to Napoleonic memorabilia; most notable is the framed Napoleonic flag. The designs on the flag consist of various emblems of Napoleon presented together with formal designs in the style of the First French Empire. This design was the standard of the Imperial Guard of Napoleon, First Regiment, Foot Grenadiers. It is uncertain whether this flag is an original or an early reproduction, but is dated to the early 19th century. Traditionally, a gilt bronze eagle was attached to the top of such flags' staffs, which served as a symbol of the divine authority of Napoleon's empire. Unfortunately the eagle that accompanied the Gardner Museum's flag was stolen during the March 1990 theft. 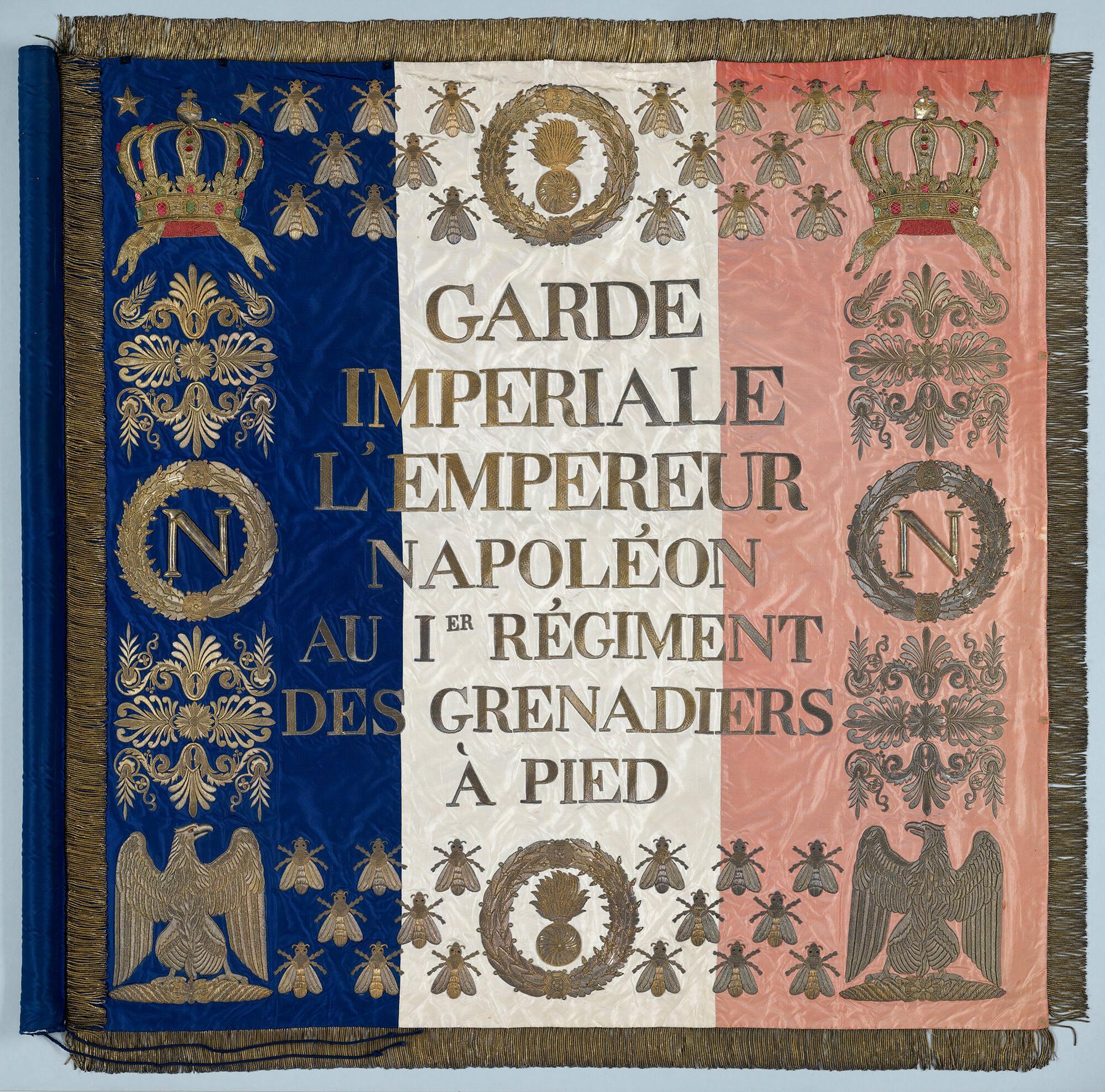 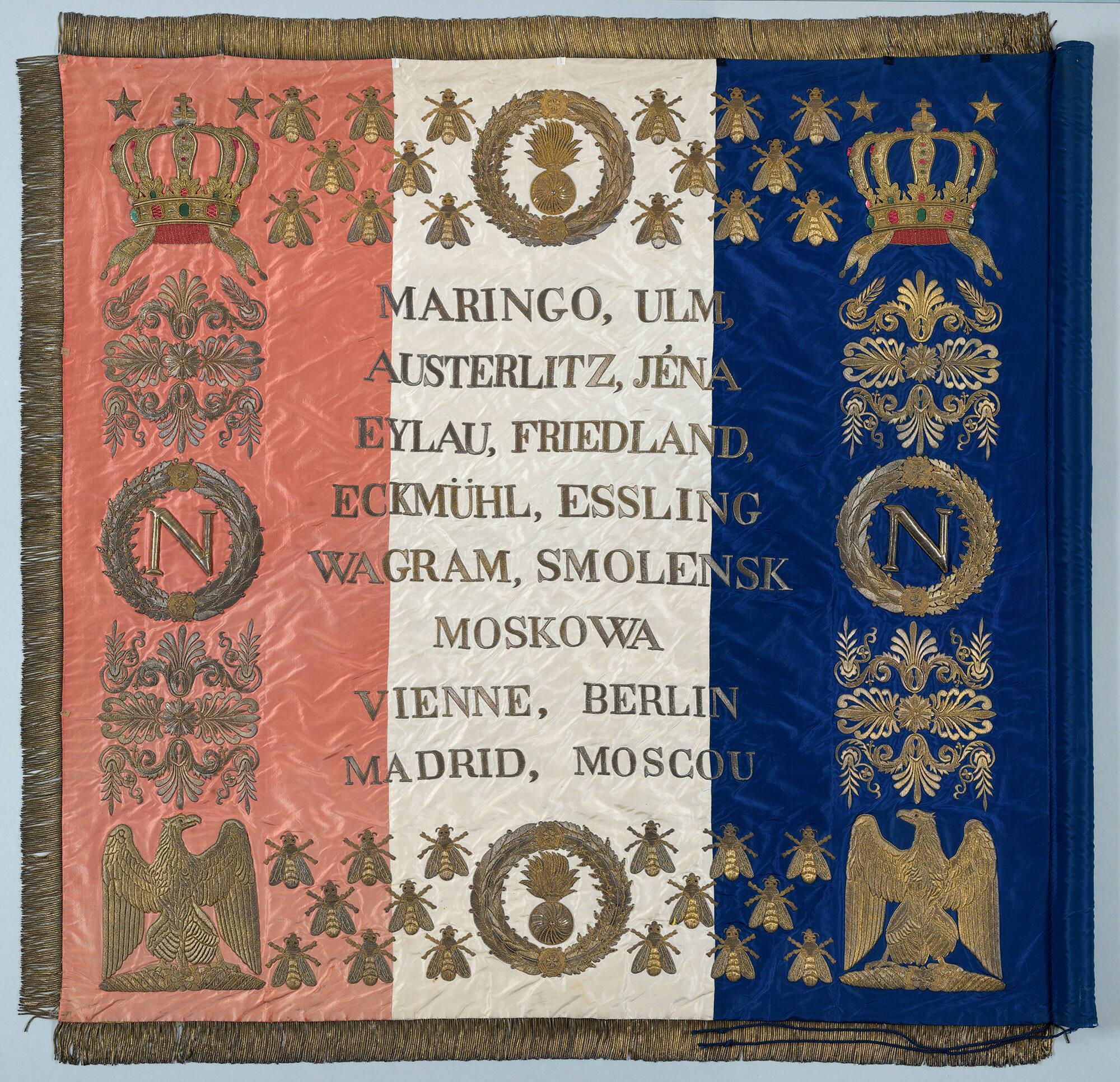 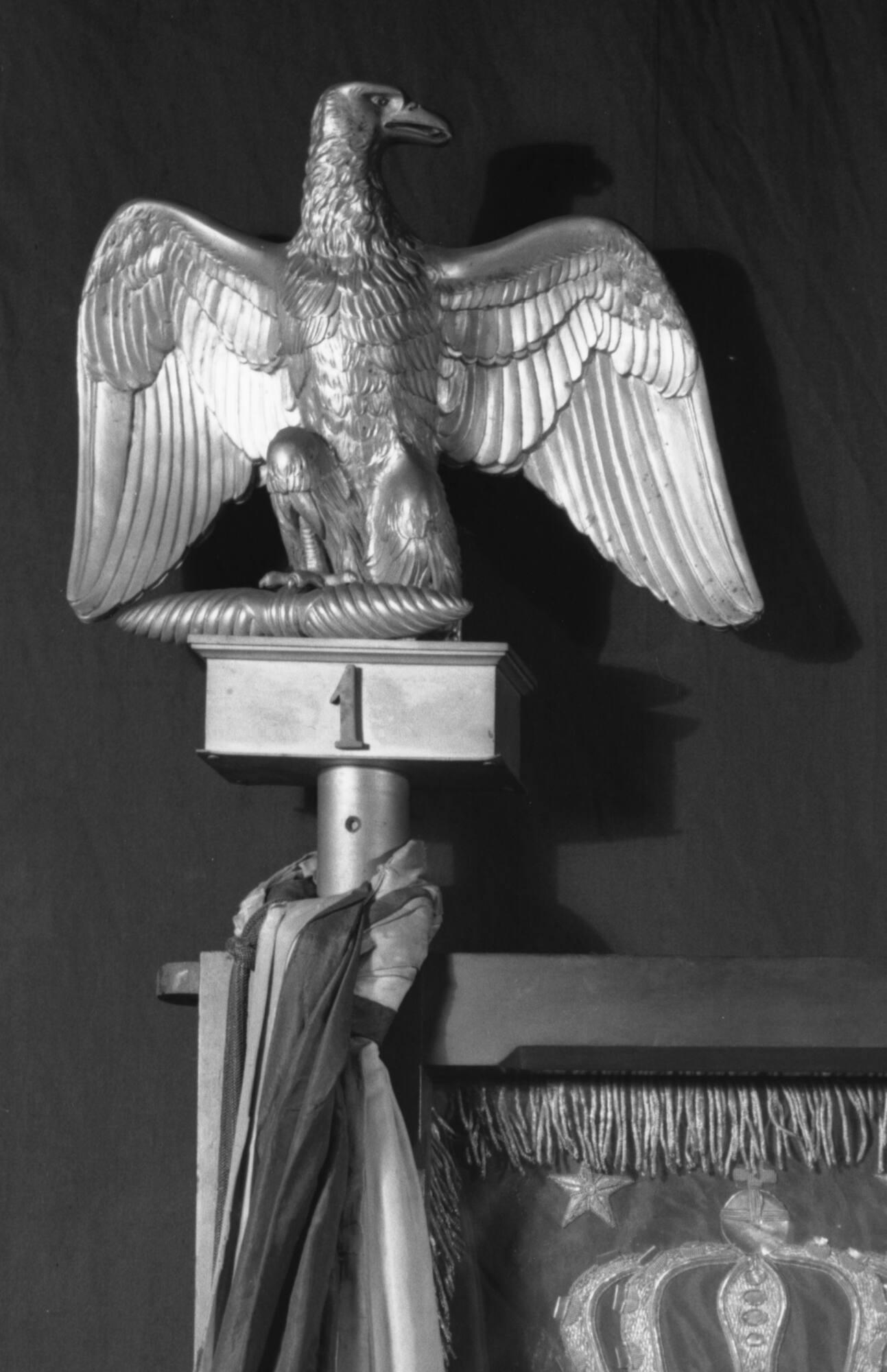 Near the flag, there is a pair of tall wooden cabinets fitted with gilt bronze mounts. These were advertised in a sales catalog as once belonging to Napoleon. Theoretically, they were used by him during his exile on the island of Elba from 1814 to 1815 after he was first defeated and deposed. This alleged provenance undoubtedly piqued Isabella's interest and she purchased them in 1880. Whether or not this back story is true is  unclear.

Sitting on top of one of the cabinets is a display case with smaller Napoleonic objects. One is a lithograph of the former emperor by François-Séraphin Delpech, and another is a photograph of a bust of Napoleon. On the back of the photograph Isabella handwrote, "Bust of Napoleon, made by Cerrachi, who afterwards conspired against Napoleon's life and was executed." Isabella clearly knew her Napoleonic history. An 1811 edition of Recueil Methodique des Lois, Decrets, Reglemens, Instructions et Decisions (translated from French: Methodical Collection of Laws, Decrees, Regulations, Instructions and Decisions) is displayed open in the case, and is embossed on the front and back cover with Napoleon's coat of arms. Inside are documents believed to have been penned by Napoleon. Even the ruler’s romantic life is on display. Above the case there hangs an etching by Francesco Didioni titled For the Good of the Nation (original Italian title: Ragione di stato), which depicts the divorce of Napoleon and his wife Joséphine. 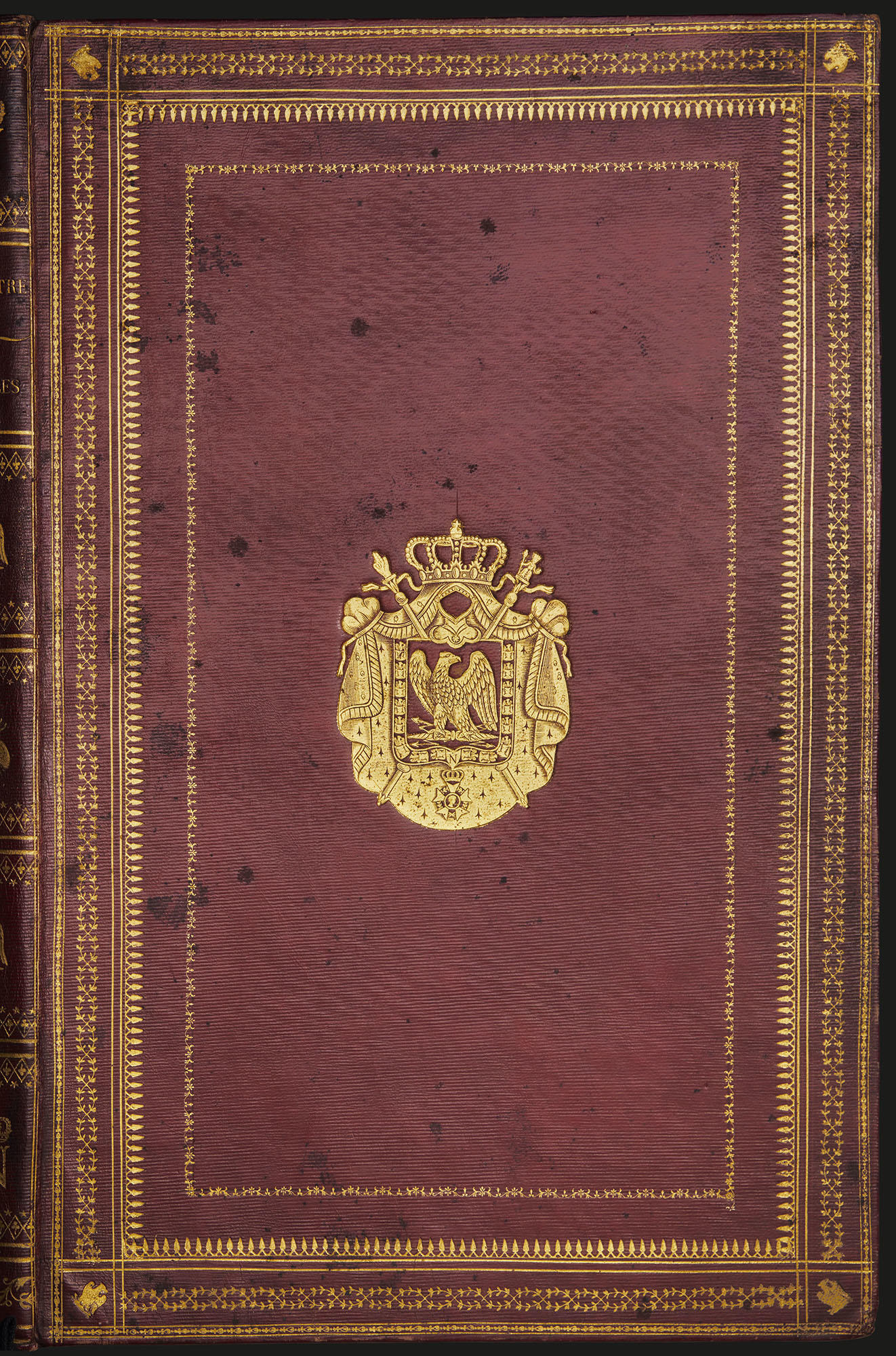 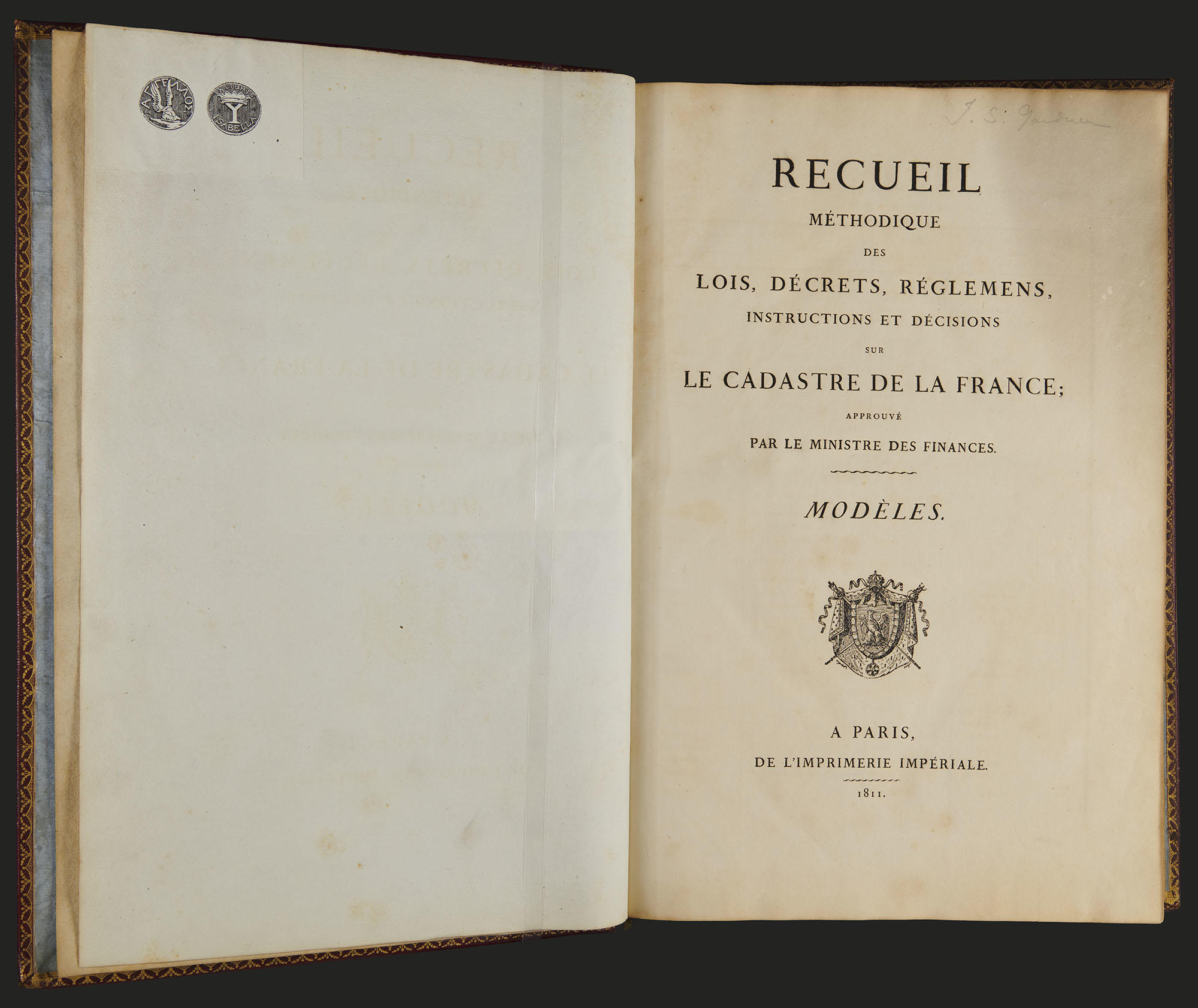 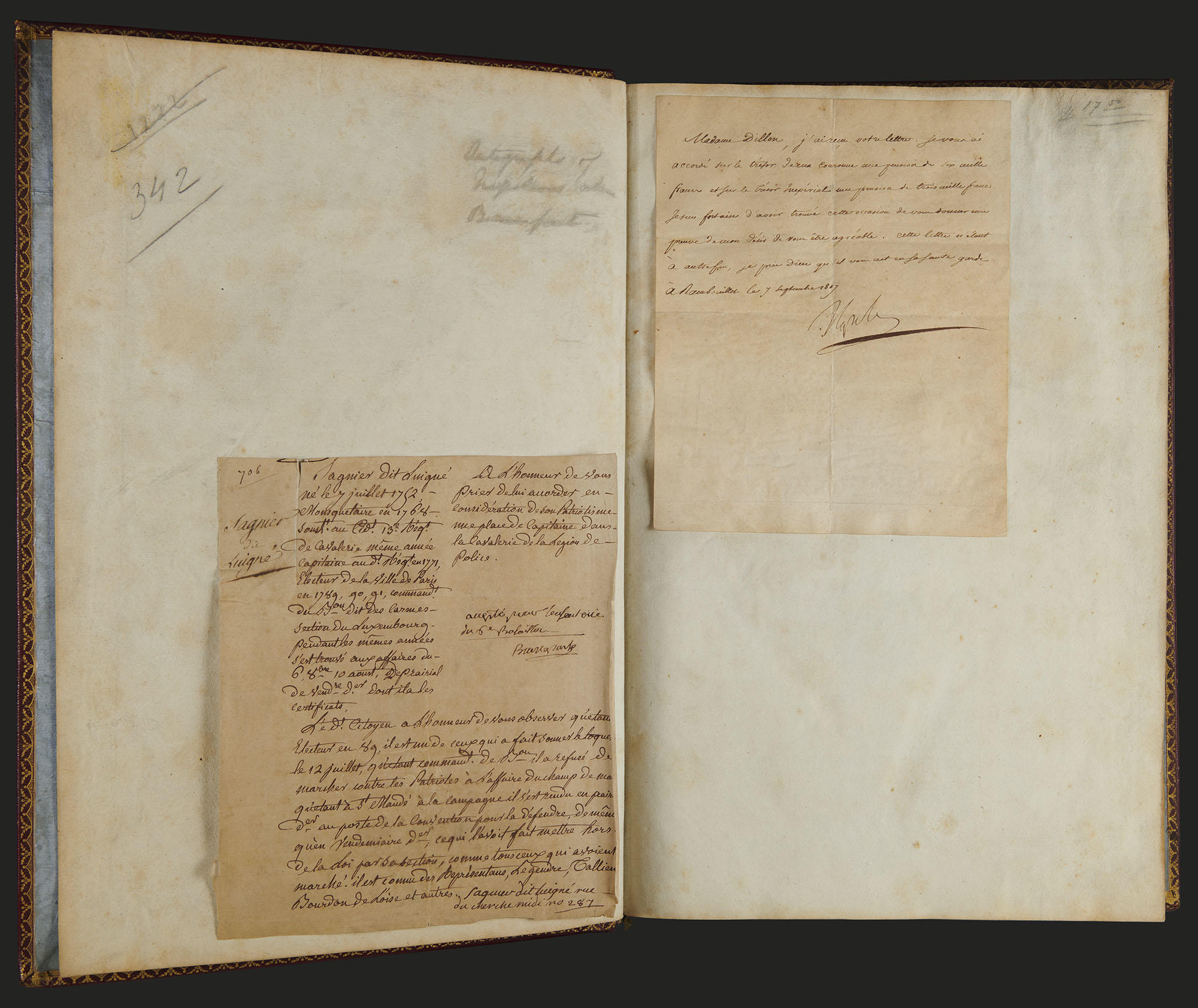 A Shared Interest in Napoleonic History

Gardner was not alone in her interest in Napoleon and collecting relics related to him. A letter to her from Francis Amasa Walker, an economist and president of MIT, recounts an amusing episode at a Boston dinner party:

Mrs. L. and I shook hands, speaking, in our admiration of Napoleon - in her enthusiasm she produced a lock (a precious small one, and every other way precious) of the hair of the great emperor. Whether she was a bit dashed to find that Prof. N [another guest at the dinner] also had one, and that, too, of the most indisputable authority, I can't say - of course, she professed gratification and interest.

Sadly, like the many locks of the emperor’s hair, Isabella’s cabinets have dubious links to Napoleon. Morris Carter, the museum's first director, notes in an early inventory of the collection that "there is no indication here that the cabinets belonged to Napoleon." Nonetheless, they are evidence of Gardner’s fascination and the ways in which this complicated historical figure intrigued her.

Napoleonic Artifacts Throughout The Museum

Although there are many Napoleonic relics in the Short Gallery, signs of Isabella's fascination are scattered throughout the museum, particularly in the books she collected. In fact, her interests as museum founder and fascination with the diminutive emperor combine in many books found in the Macknight Room and the Long Gallery. These works document the “Napoleon Museum,” which refers to the brief period between 1803-1815, when the Louvre Museum in Paris was rebranded under this name. During this time, it served as the repository for artworks plundered by Napoleon's military campaigns. After Napoleon's abdication, much of the stolen artworks were returned to their rightful owners–but a record of these ill-begotten objects remains printed in these books scattered throughout Gardner’s shelves.

At least two books about Napoleon are found in the Blue Room: one is The First Napoleon by John Codman Ropes and was a gift to Isabella by the author, and the other is Letters of Napoleon Buonaparte. Originally, Letters was acquired by Isabella's grandfather-in-law, Samuel Pickering Gardner, and eventually passed into Isabella's hands. It seems as though Isabella wasn't the only collector of Napoleonic relics in her family.

Gift at the Gardner