The Chapel, at the far south end of the Long Gallery, houses a consecrated altar that was used by Isabella Stewart Gardner―a devout Anglo-Catholic―for the celebration of Mass. Its function as an active sacred space persists to this day. Every April, as specified in Isabella’s will, a memorial service honors her memory. Liturgical items, including an early 17th century Italian carved ivory crucifix and a cloth that Gardner crocheted herself, adorn the altar table. A magnificent Gothic stained-glass window from the cathedral of Soissons in France stands as the centerpiece of the Chapel. 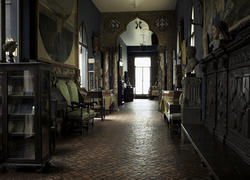 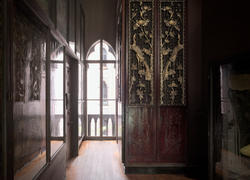